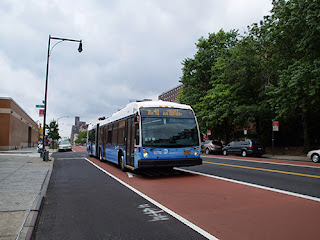 As the city revs up plans to create express bus service between Jamaica and Flushing, residents and local politicians are throwing up speed bumps and roadblocks against the initiative.

“All they’re doing is shifting the burden of heavy traffic from one group of people to another,” Councilman Rory Lancman said. “And I can’t support anything like that.”

Across New York City there are several express lines that aim to cut down bus travel times by devoting a lane exclusively to express service, or Select Bus Service (SBS). But creating an exclusive bus lane means there is one less lane for regular traffic, a point that is a deal breaker for Lancman.

In a letter written by Lancman and Assemblyman Michael Simanowitz, the officials explain why they oppose the express bus lane to the Department of Transportation and the MTA. The Kew Gardens Hills Civic Association also signed onto the letter.

“No one can tell us exactly what the plan is, and that’s part of the problem,” said Jennifer Martin, co-president of the civic association. “If they’re going to reduce a busy thoroughfare to one lane, that’s going to create a tremendous backup. There has to be a better option.”
Posted by Queens Crapper at 12:16 AM

I think the point of express bus service is to induce people to get OUT of their individual cars so as to REDUCE car traffic. The complainers are missing the point.

It's not enough that they have a q17 bus running every 3 mins? Even on the weekend, there's a q17 bus that runs every 5-7 minutes. I was sitting in my car this last Sat on union turnpike and 188th street and I saw 4 q17 buses all in a row. None of them were even filled. The express buses aren't even really express because you're just going to sit in the same amount of traffic and lights as a non express bus. By the time the lights change even, you could have picked up atleast 4 passengers. So it won't make a difference.

"I think the point of express bus service is to induce people to get OUT of their individual cars so as to REDUCE car traffic. The complainers are missing the point."

The D.O.T. is "Missing the Point" their job, their function, is to facilitate traffic through the city not impede it.

I work in Brooklyn where they put the bus lane down Nostrand and rogers avenues. They took a two lane road and made it one lane for cars and one for bus. And in some spots they took away parking.Its a disaster. The congestion is terrible. Go take a look at it and how terrible it is if you think this is a good idea.

Do not let them do this in Queens. We should be working on expanding our roadways not reducing their capacity.

They don't sit in the same traffic, that's what Lancman is complaining about, the introduction of a bus lane that would eliminate parking or a travel lane.

The q17 isn't being considered for this right now, the city is looking at Main, Kissena/parsons, and 164. 164 is least favored based on documents and comments from the city so far.

Just because a bus isn't full when you see it doesn't mean it isn't full elsewhere on the route.

Eliminating stops does a lot to reduce trip time variability, not just average trip times. If you have four stops, each has an average of .25 boardings per run, then sometimes the bus won't stop at any, and sometimes it will stop at each one to pick someone up. If you replace those four stops with one, then run times become much more predictable.

What sort of "better option" are you expecting? Can't widen the roads. Want a subway? Locals would complain like hell from the development that would accompany it.

Why not have a Flushing to Jamaica express bus that bypasses KGH by taking the Van Wyck Expressway?

Why not turn the Q65 into an SBS? It takes the less crowded and much wider 164th Street?

The reason why carte Blanche was given to Asian overdevelopment in Flushing was to drive out African Americans ....to prevent the spread of "Blacks" into Flushing and troublesome Latinos from Corona. Let' s call a spade a spade here. I personally heard old state assemblyman Morton C. Hillman once say, "Thank God for the Asians. We don't want Flushing to become a south Jamaica". This sentiment was also acted upon when a member of the now defunct Downtown Flushing Development Corporation (set up under Donald Manes) and also a past member of the old Flushing Chamber of Commerce ....had a Q44 bus stop moved because "the wrong element (from Jamaica) was creating havoc for a local merchant.
There you go. There will never be a one Flushing unless it is Chinese. That was the dirty little plan from the get go... adhered to by many closet racist politicians. The value of Flushing real estate must be maintained and inflated for the landowners.

i'm all for the SBS and reducing car traffic but the anti-car nuts have all the crazy street cleaning rules or meters everywhere making it so you have to drive or face tickets.

get rid of street cleaning and meters on residential streets even if there is one doctor's office there and people will leave their cars parked more often.

But what does that have to do with bus lines?

Q65 on 164 serves fewer riders than the 25/34 or kissena/parsons or the 44/20 or main. The point isn't just trips between the two hubs, it's to serve trips along the corridor between them. Running on the highway or diverting to 164 hurts that.

Eliminating stops does a lot to reduce trip time variability, not just average trip times. If you have four stops, each has an average of .25 boardings per run, then sometimes the bus won't stop at any, and sometimes it will stop at each one to pick someone up. If you replace those four stops with one, then run times become much more predictable

This is not true...the q27 bus went limited and the "limited" bus stops were every 2 blocks from each other. Also, yes they will sit in traffic...you really think people keep bus lanes clear? GET REAL!! Most of the bus drivers sit there honking at a car in the bus lane for 5 minutes all because people don't move. Then they still have to sit in the same red lights as every other car has to. The express buses do not save much time...if anything maybe they save you 5 minutes if that !

Reducing end to end run times by 15-20% as other SBS implementations have would be significant.

Lancman and Simanowitz suffer from the NIMBY syndrome: they don't want the Jamaica folks to travel thru their districts and the way to Flushing.

Aren't those bus lines sort of tying Flushing and Jamaica together? You are obviously not as well informed as I am or wish to deny the racism. I am not here to delve into details to educate you further.

That's right. Lancman & Co. Do not want people of color being bused through from "Black" Jamaica. Both Asians and Jews have a great distaste for "Blacks". "Schvartzas" keep out of our nabes!

The guy who raised the point said...

The Q44 ties Jamaica, Flushing AND the Bronx together right now, and has since the Bronx-Whitestone Bridge opened in the 1930s. There's nothing new about that OR the existence of a lot of racism. You don't need to educate me; I may be more educated than you, for that matter.

Morton Hillman was a schmuck of the first order (I'm pretty well informed as well), but he's long gone from the scene, luckily. The people who Hillman feared coming to Flushing are already doing so via the Q44 and the Q25 AND the Q17, Q20, Q34 and Q65. It's not like a new route is being created connecting two unconnected neighborhoods, just a faster one.

There are a lot of phony issues being raised in opposition to the SBS. But racial fears are way in the background.

Hillman was part of the Stavisky crew. He did not fart without an OK from his senator. The crew and the club are alive and well. And I must have hit some Stavisky nerve. Good! Enjoy your heartburn Toby, Evan and gang at Dem Central Clubhouse. I hope those routes go through and fuck up your turf. But, then again, Evan lives upstate...although he is a Queens district leader. Go figure!

Ass wipe...yes the Q44 ties both the bad Jamaica and Bronx nabes through downtown Flushing. But we are talking, maybe, about a route south of Northern Blvd. that could go through some clean middle class nabes. No?

No. North/south on either Main or Kissena.

The guy that raised the point said...

I have no doubt that Toby and Evan Stavisky and the gang at County have read what you've said, and are probably fuming about it (and good if they are). But I have nothing to do with them. Just setting the record straight.

im frustrated at the jamaica bound Q17 skipping the kissena blvd stop at night 9:00 /11:00pm just because they feel like doing so, ive waited 20 minutes or more with 3 unlimited back to back and then have the jamaica bound not stop.. why is that, its like they make their own rules, bus wasnt full either. ive been stopping them in the middle of the street pleading for them to answer my question as to why they do this to no avail no answer, i work at night and need to get to jaamaica to take another crappy bus line the n22 or n24 to my job. every second to me counts, sure they dont theyre at the job as they skip on by.. then more frustrating when you think about it on how they want to raise the fare to 3.oo dollars a ride this is ludacris. MTA can go to HELL!!!!!!