Watch out for whitefish! 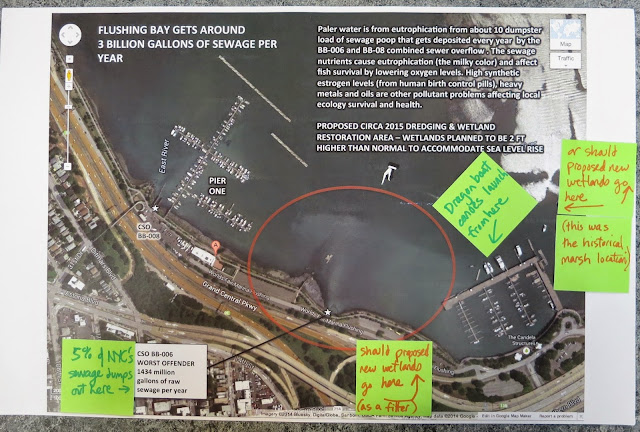 "Hi Crappie I got a real shitty story for you.

Last night I attended a meeting at Flushing Town Hall about Flushing Bay presented by the Empire Dragon Boat Club and Riverkeeper.

We learned that 1.2 billion gallons of untreated sewage enters the bay each year mainly from three discharge pipes and that there are also four pipes that empty into Flushing Creek. We also learned that sewage tank that was built in Flushing Meadow Park that was supposed to cure the problem only reduces about 56% CSO's from just one pipe. Also one of the pipes is from the Bowery Bay Sewage Treatment plant in Astoria.

They said every time it rains more than 1/10 of an inch CSO's go right into the bay. Add this to Willet's Point where there never were any sewers and other contaminates like oil etc got right into the water. Then there's La Guardia Airport that has had a couple fuel spills and all the de-icing fluid that is used has gone into the bay.There is also industrial pollution from cement companies that wash out the trucks and it all goes into the water.

Members of the Dragon boat teams are really concerned because they practice in the bay. One guy said that the joke on the team is that if you get sick once you are good for the rest of the season. Others said they throw their clothes away rather than washing them. They joked about seeing jelly fish but it was condoms floating by.

This is another example of piss poor city planning. With all the building of high density housing the problem will only get worse. NYC is violating the Clean Water Act and Riverkeeper says they sued the city back in 1992 but these things take a long time in the courts.

There was only one Asian guy there from a Dragon boat team and he claimed that fish and crabs from the bay are being sold on Main St.Fish and crabs are not considered safe to eat according to Riverkeeper."

- Anonymous
Posted by Queens Crapper at 12:29 AM

So....as we used to call them...Coney Island Whitefish are abundant in the bay. Turds and whitefish....some enterprising Chinese fishmonger will figure a way to make these delicacies pay off.

I always thought the stench as you drive by on the Whitestone Expressway by Flushing Bay was part of the 'neighborhood appeal' I always hear about.

Not a neighborhood I would live in.

Having grown up near flushing bay/bowery bay, I can tell you that this is an old problem that was never solved. There has always been untreated sewage entering the two bays. Formerly it was all the time, and now it is whenever a small amount of storm drainage overwhelms the system and they shunt untreated sewage directly to the bay. We used to play ball nearby and would see floating mounds of shit routinely accompanied by hydrogen sulfide gas odor. Any improvements for the 64 Fair or to meet federal regulations have been whatever was minimally required. Definitely did not solve the problem.

If an individual or a corporation were to do this they'd be in court or in jail already. But government can pretty much do what it wants.
For those that want government want to run everything, here's an example of why it's a bad idea.