Are the times changing for the better in Jamaica? 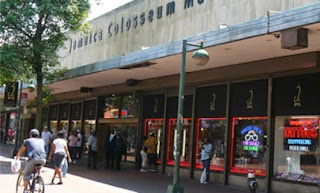 In another big sign that Jamaica is changing, the more than three-decade-old Jamaica Colosseum Mall known for its hip-hop clothing stores and huge jewelry exchange is being marketed for sale.

The mall, which was a Macy’s until 1978, has been listed by Epic Commercial Realty for $45 million.

Yep just add a Starbucks there and it will soon become liberalized. Atleast it'd be better than (most) of the people who live there now.

GOOD. The Jamaica Colosseum Mall is one big piece of shit, with mostly crap stores and 99 cent junk. Has one ever been in it, a bottom of the barrel ghetto mall and I mean bottom.

I do not like Starbucks, but would be much more happier seeing a Starbucks than all the low class ghetto/third world crap that is there now.

It is neighborhoods like Jamaica (run down for decades, crime ridden, etc) that need to be gentrified.

It is fine for a community to have a little bit of shit, a 99 cent store, one beauty supply store, etc, but when you have so many of them and everything is on this level, it just becomes one big pile of shit which just attract shit.

As an owner, I welcome it.

Just heard that the city has changed its mind and will instead convert the Colosseum Mall into a homeless shelter. They will keep the name however.

Well, making it a homeless shelter will guarantee occupancy.

Just heard that the city has changed its mind and will instead convert the Colosseum Mall into a homeless shelter. They will keep the name however.

Sending the homeless to the Colosseum - where will they keep the lions? Too bad Emperor Galante won't be across the street to watch the festivities from his outdoor smoking deck.

Starbucks in Jamaica? You can walk around with a better quality knife in your back.

How about turning it into a real Colosseum, with gangstas instead of gladiators fighting to the death?

The peeps would love dat.

Better than making those poor dogs and roosters fight.

You can walk around with a better quality knife in your back.

I remember that incident by parsons blvd.the victim did not even feel it at first.

Is it too soon to prefer a hatchet instead?.It's way preferable than their pumpkin latte