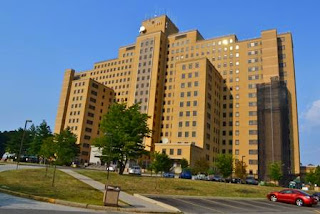 "I have something for your Queens Crap website: Today, January 13, 2015, around 3:55pm, I was walking on Winchester Avenue between Union Turnpike and Hillside Avenue, and a woman walked by me STARK NAKED. It must have been like 20 degrees outside, and she didn't have any panties, bra, shoes or socks on. NOTHING AT ALL. Not even jewelry.

I went into the Creedmoor complex to tell someone. I went into building # 73, there was a receptionist and a man there in a small reception area. I told the woman there. She asked me is the woman I saw dark skinned? I said yes, but not too much. Is she a bit chunky? Yes, and just a little taller than me. Then the receptionist said, oh that must be "CeCe".

Apparently they knew who the woman was and this woman has done this before. I couldn't believe it. What a sight. A flabby 30 or 40 year old woman stark naked in the cold walking down the street. Don't know where she was going. Cars were stopping and looking. Later on, I went back into building 73 and asked them what happened, they said the cops and the firemen all showed up to corral her.

I'm writing to you because I live near that Creedmoor area, and last year an inmate from Rikers Island escaped around there. To enter that complex, there's a small opening to enter, on Winchester close to Union Tpke and there's a traffic light there. If you go in, there's a guard booth BUT there is NEVER EVER any guard there. There really should be!! This area is really scary. I witnessed something really, really weird there today, the naked lady."

Marie
Posted by Queens Crapper at 3:44 AM

That is terrible. ...the whole staff should be fired for even allowing something like that to even happen. Creedmore has been a problematic hospital for a long time though and nothing is ever done about it. Where is joint commission? They should step in and do a surprise inspection on this hospital. .....unless they are getting paid off to look the other way.

DA Richard Brown. Where are you?

Creedmore. A prime example for the saying 'good enough for government work'.

Speaking of that neighborhood: what's with the trailer (rear portion of truck) that has been parked/abandoned on eastbound Union Turnpike under the Grand Central overpass next to Alley Pond Park? I don't go there often enough anymore, but the past two times were separated by over a month, and that trailer was still there. Aside from being a commercial vehicle parked on a street (which, I know, doesn't seem to be enforced anymore), what if it was put there for nefarious purposes? No police were interested in it? And it was there before the police slowdown.

I certainly hope an incident report for failure to supervise, thus putting CeCe at grave risk (hypothermia, sexual assault), has been filed with the State. This isn't just an affront to the community, it's a failure to attend to the vulnerable. Either, or both, angles should be used to get immediate action.

let's all just remember craziness is just a frame of mind and who really makes up the rules a psychiatrist can't tell you anymore what is normal what is not normal .

I've lived in Bellerose 50 years. Rarely any incidents like this. Suppose it's bound to happen.

Maybe she's running for office on a platform of "transparency".

these patients aren't all locked in the hospital, so some do have permission to roam the grounds.
also if you believe 'the whole staff should be fired'.. who the else is willing to work their for those wages? they deal with a part of society nobody wants to deal with.

This is nothing. Last year this HUGE HUGE naked black dude with tazer wires in his back was running and literally plowing right through wooden fences across people back yards.
Nearly 7 feet tall a good 270 pounds. An elderly woman had a heart attack.
He was tossing the cops like rag dolls, pepper spray, Tasers, NOTHING was stopping him.
7 cops had to him down for a tranquilizer injection
Some very dangerous people are in that hospital

This song must sum it up