Jamaica is focus of DeBlasio's affordable housing in Queens 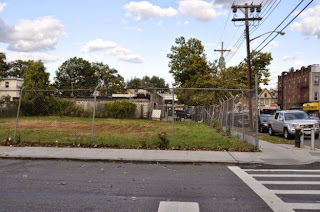 In the de Blasio Administration’s latest effort to make a dent in the city’s housing crisis, the Department of Housing Preservation and Development is calling on developers to build housing on about 175 sites across the city.

The agency released a list of vacant, city-owned properties for the construction of affordable housing across the five boroughs last week, including 17 sites in Jamaica, which are the only Queens locations.

The agency is collecting applications from developers until Feb. 19 for the program.
Posted by Queens Crapper at 12:26 AM

The U.S. is 3.8 million square miles, 99% of it more affordable housing than what is found in NYC. The Queens Courier should stop promoting the special interest lie of a "housing crisis" in NYC.

Empty lots in bad area's, I wonder why?

My question is why has the city left 17 properties, especially in the crime ridden section of South Jamaica empty for so long. Vacant properties do not serve a community well at all, so WHY?

Looking at the map that is in the article, you will see the cluster of these places will go in one of the worst sections of South Jamaica, not far from the notorious vacant James Fobb house, an area that is pretty much a big mess to begin with. So do you think the City has any plans to improve this horrible section or if they get the go-ahead, just dump affordable housing in the middle of this mess. And who would live there or should I say what type of people?

Interesting if you click on the city wide map of all vacant city properties across the city, they are all in run-down areas that are communities of color. So again why would the city for so long leave these properties empty? Again, I say, would you have seen this in Forest Hills?

Just call me “suspicious” whenever the city, elected officials and real estate developers are involved. We all know what happened about 20 years ago when all the waste facilities were dumped into Jamaica, North Brooklyn, South Bronx near residents. All areas of black and brown people or lower economic areas where the City really does not give a shit, although they will say otherwise.

They have to fix that whole area up before decent people actually move in there. The schools are bad, there's no quality stores out there. Everything over there is run down and disgusting. The people in that neighborhood are disgusting and show a lack of value to their community. Half of the people who live there too should be deported right back to the Caribbean islands that they come from. They went from being low lives in their countries to being low lives in this country.

the efforts and money should be to fix the affordable housing that exists(All the NYCHA's)than the ones mayor big slow and all his donor land barons want to exist.

I got no beef here. Dump them in Jamaica which has been a shit hole for 50 years.