Two years ago to the day that the city embarked on a $94 million restoration of the Loew's Kings Theatre in Flatbush, the institution reopened its doors and reclaimed its standing as Brooklyn's largest theater. The restoration was painstaking: when it began in 2013, the theater had already been sitting vacant for four decades, a time during which looters plundered everything that wasn't bolted down (and most of the things that were), and nature found its way into the neglected structure. 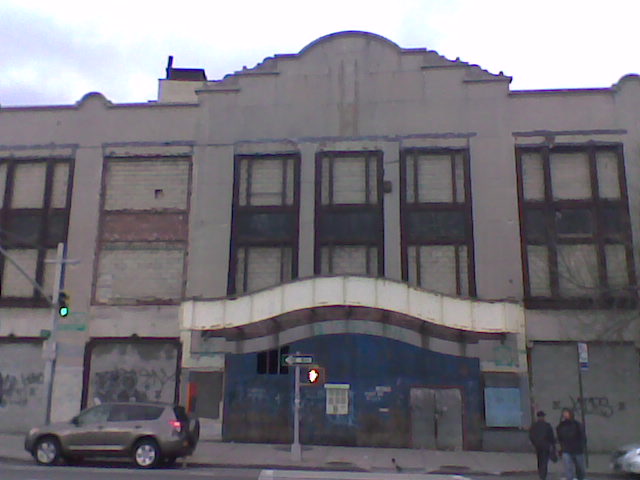 Posted by Queens Crapper at 5:56 AM

where the fuck did they get 94 million for a theater?a better use would have been to convert that place into a homeless shelter,but the city is more concerned with the potential of the creative class and their frivolous spending habits.they better hope bon iver is still popular.

I am sick of brooklyn and the marketing of it.it's not a place to live,it's a product.I'd like to mention the lack of funding for restoring other theaters in eastern queens that aren't near the subway,but like I said before,these are the leper colonies of the boros and will never be considered hot.


since that photo of that rundown theater is in flushing,I thought that town was under some sort of revitalization considering it's near willets point.Was I mistaken?

I love ignoring Queens. I also hope the blizzard stopped the poor underdog yankees from making moves against my beloved bahhhhston red sox who play at fenway pahhhhk

There was plenty of money to restore the Keith's but Donald Manes wanted his pal Tommy Huang to get hold of it. Was that payback for the money that might have flowed into Manes' pocket from the Far East? In 1986 the Keith's sold for only 3.4 million dollars and it was in very good shape. It would have made a wonderful performing arts or convention center. Being so well located, a restored Keith's would have furnished the true attraction that Flushing needed and still needs. It's destruction was a product of borough hall corruption. Where do we go from here? Who knows?

As long as Queens continues to be a backwater borough....void of intelligence....voters will continue to place in office new crooks more crooked than the past ones. Look in the mirror and discover wht Queens is a dump compared to Brooklyn which has it way over us in culture, architecture, art and music. Queens Con Artists on Culture and The Arts is peopled by dumb patronage job employees as their reward for sucking up to the Democratic political clubhouse. WTF is Terri Osborne doing these days?

94 million? Are they kidding? Who signed off on this?

What is the tax revenue generated? What jobs were created? What increase in income to the community did it represent?

If they can't answer that they have to leave this to private investors (without tax breaks paid for by the rest of us) and stop spending money we just don't have!

Tommy Huang fled the country when it became known that 20,000 gallans of fuel ment to burn the RKO to the ground was discovered by the Fire dept in the basement,Chuck schummer got Tommy a deal to pay a fine with no jail time and he came back,I'm sure Shelly Silver and Chuck you Schummer scored a little 💰 for themselves for the sweetheart deal Tommy got.arson is not arson when your a Rich Democrat.

The revival of the Kings Theatre has already caused an increase in the price of real estate. Soon the whole area will become resurrected from decay. The Keith,s revitalized , would have brought a more civilized law abiding diversity to Flushing , instead of its status as an Oriental colony complete with raw sewage spilling into the bay and questionable liquids stinking up its streets.

The Keith's was ALLOWED to deteriorate. It's current condition was due to the lack of concern of certain politicians, community board members, etc. They did not have the vision that Brooklyn had for their Kings Theater as a linchpin for renewal.

Sometimes you have to spend money to make money. Marty Markowitz realized that as borough president of Brooklyn. Our crooked burro presidents are in it for what they can quickly put in their pockets for selling out Queens. Donald Manes and his accomplice Claire Shulman sandbagged the Keith's. The interior spaces were originally all granted NYC landmark status. It was Manes who pushed for the curtailed designation. Guess who represented Manes at the old Board Of Estimate hearing regarding the land marking of the Keith's ? Deputy borough president Shulman lobbied for the abridged designation which covers only the ticket lobby and grand foyer. Those are the historical facts, ladies and gentlemen.

Brooklyn climbs to greater heights while Flooshing sinks into a sqallid swamp. The only real culture you will be able to find in Queens soon is Dannon cultured yogurt.

I heard that the Loew's Kings theatre is booked solid for a whole year with top names in entertainment. WTF do we have in our farmers' borough. We have country clods being bused to Theater in The Park. Queens is the laughing stock of NYC. "All In The Family" and "The King Of Queens" is living proof of what we are known for.

Where is Wellington Chen? Didn't he sit on CB7's "landmark committee" for years? He is also responsible for the Keith's status quo. He was too connected to his fellow countryman Tommy Huang . Chen might have feigned concern but he did not lift a finger against Huang. Taiwanese blood is obviously thicker than American theater history.

Two Shulman quotes RE Tommy Huang and the Keith's:

"Hasn't he suffered enough. He hasn't been able to build for two years on the site". "He pays his real estate taxes. What can we do?"

These were in response to beep Shulman being asked to pursue punitive action against Huang.

Our borough government consciously chose to just look the other way. This continues today when it comes to preserving the little remaining architecture that Queens has which is landmark worthy.

soon to be a Queens expatriot said...

LOL! You could always see the latest has beens playing Queensboro College performing arts center. Of course, when your career hits rock bottom, Theater in The Dark sounds good.

Speaking of , I love your reference, "Theater in The Dark"....how much money got sunk into that turkey venue? The Kings is one of the all surviving "wonder theaters" and fully deserves money spent on refurbishing a national...YES NATIONAL...treasure. BTW, the Keith's is listed on the national register of historic places. Wake up you bozos!

Floo-shing or Frushing has been defacto deeded to the Chinese. Diversity? Baloney! This is an offshore colony. Maybe the next generation of Oriental immigrants will be of a higher class. I am tired of the cheap micro mall shops and cheesy goods. It will take about twenty more years before anyone sees the raising of Flushing's image.

I wonder what John Choe...wearing two hats as executive director of One Flushing and leader of the resurrected Chamber of Commerce ...has to say. Since he draws two salaries we shall permit him two opinions.