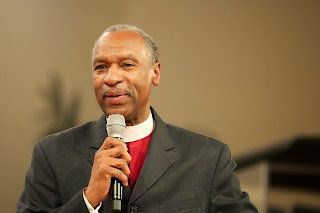 For the third consecutive day, Governor Andrew Cuomo announced appointments within his administration and also said he would nominate Floyd Flake, an influential black pastor, to the state's Public Service Commission.

Flake, a former congressman and pastor of the Greater Allen A.M.E. Cathedral in southeast Queens, has long been politically friendly to Cuomo, encouraging him to run for governor ahead of David Paterson in 2010 and welcoming him to a Sunday service last fall.

The Public Service Commission regulates utilities, including electrical and cable companies. It's unclear what experience Flake has in these areas.

His appointment requires Senate confirmation.
Posted by Queens Crapper at 3:54 AM

This is the same guy with the filthy church that Joe Moretti is always slamming?

Wow - he must give good head!

Yes, same guy with garbage in front of his church parking lot. And this is the same guy who in 1990 along with his wife was indicted alleged fraud and embezzlement of church funds. He also has an ownership interest in Aqueduct Race Track Entertainment Group, which there was some controversy with that.

This is the guy who became a congressman for a few years in order to embezzle $25 million for his so -called church in Jamaica. A thief. A tax evader. A liar. A phony. Flake is a fluke. Why would Cuomo even go near him? Hmmm.

No matter how you view this it reeks of political payback.

Methinks that Flake is preparing for another run at elective office.
Considering the relationship between de Blasio and Cuomo I'd say the reverend is setting his target as City Hall.

Does the Public Service Commission ever say no to the utilities it is supposed to regulate?

I don't expect the Republican-controlled State Senate to oppose the nomination.

From running "Allentown" to the PSC. What a flaky situation. The PSC has no balls and now it gets "the Rev" .

What?!? He couldn't appoint anyone better (with actual experience and meritocracy), instead of yet another crooked black politician lackey? What experience does this pious fraud have in regulating utilities, or electrical and cable companies, I shouldn't wonder? Andres Cuomo keeps dumping garbage on top of a heaping pile of more garbage--and they are locked in for life with cradle-to-grave entitlements that they never earned and deserved, and which no one said they wanted! Now I understand why this corrupt and dishonest governor (who last year disbanded his own ethics commission at the exact time that they were prepared to investigate the governor himself for corruption). But, now that US Attorney Preet Bharara has taken the reigns to launch a federal probe of Andrew Cuomo's corrupt and monstrously self serving house of collapsing Albany cards, I'm only sorry that this impostor of a governor didn't get a metal bracelet slapped on his filthy hands by Mr. Bharara, while his equally corrupt and dishonest father was still alive to witness karma catching up to him--with a long overdue vengeance. Between father and son, every taxpaying New Yorker has been held hostage by a corrupt, dishonest, dishonorable, disloyal, derelict and dysfunctional system of government that treats its civil servants and civilians like INDENTURED SERVANTS--with impunity. Freedom and democracy? Where? It's the same, vile, vapid and vacuous loop of taxation without representation, and now more of the same cronyism, political favoritism and preferential treatment in Andrew Cuomo's stable of rogue politics that keep getting worse by the hour. But, where are those handcuffs, Preet Bharara--that should also include Sheldon Silver--and his pay-for-play public empire of shame, dishonor, extortion and disgrace! I just hope that I will see their collective downfall before the end of my natural life span. Prosecutors take an awfully long time to topple the corrupt and powerful at the very top of the garbage heap!!!

Does anyone wonder why Queens County is a raw sewage plant of corruption, dishonesty and entrenched, cradle-to-grave politicians who jockey for more unearned and undeserved power and position than the hardworking and deserving constituents that they purportedly represent? When political leadership is false, fake and failed (that allows any and all politicians to live like Hollywood moguls), then it is time for activism, protest, rally and resistance. Not only is Floyd Flake a pious fraud with a proven record of zero leadership (except where he leads himself into a government jackpot of self enrichment), but now he will soon be regulating complex public utility, cable and electric negotiations, when he can barely take on lunch and a manicure without complaining about a stressful day! If anyone doubted the systemic corruption, dishonesty and failure of Andrew Cuomo's (and Sheldon Silver's) grab for total power in Albany, then this latest example should call voting citizens to action to ensure that the rigged playing field is finally leveled with the impeachment (or imprisonment) of Cuomo and Silver. It's a filthy disgrace! I can hear Boss Tweed laughing with impunity from the grave!

How much extra benjamins is da brutha gonna rake in with this appointment? I guess Cuomo is paying back, like they all do.

No honesty left in government.

Somebody needs the "Black" vote.

Why hasn't my post appeared today, regarding Governor Cuomo's latest patronage appointment of Floyd Flake? Likewise, I commented yesterday (January 13th), on Bill de Blasio's faux pax with immigration, and that too has not been posted. Please explain.

Both of your comments regarding Flake are posted. I did not receive one about deBlasio.

The Public Service Commission is a perfect perch for "pay for play" if you are a payer/payee or player/playee.

It's getting harder because the executives at Verizon, Con Ed, Time-Warner and other utilities don't want to go to jail.

Flake was also a college president, although it was alleged that he lined his own pockets while there.

Where are all the Dem Progressives complaining about separation of Church and State?

Imagine someone appointing a catholic priest.

Cuomo needs the black vote. What a sneak and liar. His father must be turning over in his grave already.