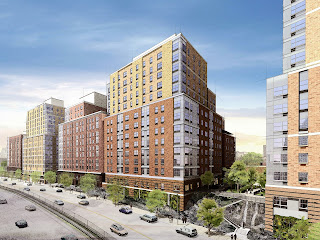 Taking a page from the film Field of Dreams, developers have been lining the city's outer boroughs with a growing number of independent and brand-name hotels, convinced that if they build them, guests will come.

So far, they have: Outer-borough occupancy rates between January and November 2014 ran as high as 81%, according to STR, a hospitality-industry research firm. Most hotel markets operate at 65% occupancy, while Manhattan is "pushing" 83%, said Sean Hennessey, chief executive of Lodging Advisors, a Manhattan-headquartered consulting firm.

"We're in a huge tourism boom, and that echoes across the boroughs," said Rob MacKay, director of the Queens Tourism Council, which is a part of the Queens Economic Development Corp.

With a record number of tourists visiting the city—and an estimated 22.5 million hotel guests among the nearly 56 million visitors to the city last year, according to NYC & Company—hoteliers have turned to the outer boroughs to snag out-of-towners who can't score a reservation in Manhattan's tight hotel market or think it is too pricey.

Over the next 36 months, more than 100 hotels are slated to open across Brooklyn, Queens, Staten Island and the Bronx. Still, the future of outer-borough lodging is anything but certain.

"The unanswered question is how deep is the market for people who dream of coming to New York and couldn't because there weren't enough rooms available or in their price points," said Mr. Hennessey.

Moreover, the expansion of the city's hotel sector beyond Manhattan could be threatened by a City Council push for changes that would end hotels' right to open in industrial and manufacturing zones without council approval. Council leaders argue that industrial and manufacturing jobs in Brooklyn and Queens, which represent the strongest outer-borough markets for lodgings, pay workers nearly twice what the hotel, retail and restaurant industries do.

Sorry, but I don't think that having 20% or more of your rooms available on an average night is a good thing for one's business. Hotels in Queens become homeless shelters. And a dirty secret that no one wants to discuss is that even the ones still operating as hotels house the homeless in their empty rooms at night. Who in the borough is saying, "You know what our neighborhood could really use? A hotel!"
Posted by Queens Crapper at 12:01 AM

This is just ridiculous. ...if you're only pushing an 83% occupancy rate then that means that there is still room to house these stupid annoying tourists. Also, if hotels are wanted here then why are they being turned into homeless shelters instead of back to hotels? That makes no sense. This makes as much sense as dumb Bloomberg thinking that bigger class sizes and less schools are the way to go!!

I like that hotels that are NOWHERE near the subways. I would lose my mind if I got to shithole Queens and then realized that I'd be waiting on a shitty corner for a bus to take me to the trains.

A big part of the fun of being a tourist is strolling around at night and popping into bars and cafes. Not taking the #7 back to bumfuck! What a downer! If you can't afford the city - perhaps you shouldn't visit the city.

These hotels will all be homeless shelters in a year or two under Skippy deBlaz' regime!

And BTW QC readers - a lot of liberal Dems do not support him - so stop blaming all the over-development and liberal immigration policies on us - making sleazy deals with big business and developing a easily-manipulated underclass is right out of the Republican playbook!

Being a Democrat is proof that liberalism is a mental disease.

"a lot of liberal Dems do not support him"

Those polling results in 2013 were a lie?

Ya gotta cater to the flood of third worlders who cannot afford the Waldorf Astoria. LOL!