Only the best and brightest 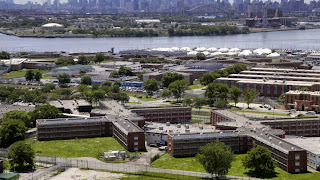 One applicant to be a New York City correction officer had been fired from his last job as a security guard for stealing. Another admitted he had regularly socialized with gang members. Another had debts of more than $400,000.

Yet all those candidates and dozens like them were hired last year to be part of the force overseeing nearly 11,000 inmates on Rikers Island, according to a yearlong city probe of jail hiring practices released Thursday. The Associated Press obtained a copy of the findings hours before they were to be announced.

The probe found systemic problems with the Department of Correction hiring system, including no recruiting strategy for the past six years, that allowed an alarmingly high number of hires who had arrest records, gang ties or other red flags that are markers for corruption.

Department of Investigation Commissioner Mark Peters said the chronic problems of violence, smuggling and bribery that plague the city jails can all be traced to the character and qualifications of the employees.

City investigators randomly pulled 153 application files of guards hired last year and found that 54 — or 35 percent — "presented significant red flags that should have either precluded their hiring outright or required further follow-up."

The probe found 79 hired officers admitted having friends or family members who were inmates — including one with nine relatives who had done time in Rikers. Ten new hires had been arrested more than once, and another 12 had been rejected by the significantly higher standards of the New York Police Department, including six for psychological reasons and one who failed a drug test.
Posted by Queens Crapper at 12:18 AM

A judge gave me 3 weeks on Rikers in a divorse dispute, one guard beat me handcuffed so bad I lost 25 percent of my vision in one eye,the guards openly sell drugs in the hall,cigarettes were $200 a pack with a pack of rolling paper,1 cigerette became 4 at $10 a piece,I saw a young white kid get raped while the guards laughed, Rickers should be taken over by the Feds,kids are dying in there for Sport, its about time the truth about Rikers is getting out,ITS ONE GIGANTIC CRIMINAL ENTERPRISE.

It's a problem very similar to the NYPD. There needs to be more emphasis on both background and psychological red flags.

The thing separating the guards from the inmates are the bars.

I wish they would perform similar background checks on some of our elected officials...

On another another note, one thing I have personally experienced about Riker's is the sheer incompetence or perhaps laziness of many of the administrative staff--as demonstrated by the egregiously lengthy waits while prisoners are shuffled in and out to visit with family, friends, and/or legal counsel. Change is definitely necessary, but I wonder if it should be in attitude!

Nonsense. We are lucky to have people willing to deal with the crimminal vermin of this city, the numbers of which increase every day under this bullshit new Mayor.

Prison is The Number 1 breading ground for converting African Americans to Islam,in prison people are already angry and the version of Islam preached is Hate,I saw it daily.

There is a reason the NYPD and like agencies do not consider the Corrections officers colleagues.

You can't tell the guards from the inmates.

If we are going to have lousy prison coverage, at least we can do it at a discount and not have anyone of the 'officer's' hurt on the job (remember the story about the guy who slipped on lettuce and hadn't worked in years?) that we are supporting him for life as he jet ski's in Florida!

The criminal activity I get, but why is a guy's $400K debt a matter of job qualification?

$400k debt is a problem that can be fixed through gang affiliation such as drug running or contract hit,you really don't get it do you.want to know where the judge who sentences you to life lives,jury members,pay the gaurd,

supply and demand. you pay below market rate you will get below market workers. problem is how much money can you pay people to deal with the WORST people in the city. 100k will get you the bottom of the barrel. Even if you aren't corrupt when you take the job you won't give a shit once you see how both the city and inmates treat you. now you have literally 95% of the employees that don't care. you just don't have the amount of candidates to chose from. the job just sucks. on top of everything else now the publicity of it is so bad you won't have people even applying anymore. good luck NYC!!

What an absolute disgrace. What a credit to the Liberal Party machine.