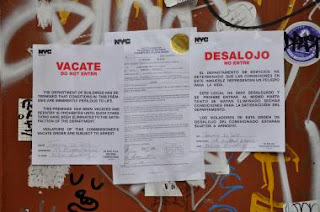 Landlords of unsafe buildings could be forced to pay for displaced tenants' temporary housing while their apartments are being fixed under proposed legislation in the City Council.

Councilwoman Margaret Chin is renewing her push for the bill, which was introduced last year, in the hopes of making it easier for New Yorkers to find temporary housing after their homes are vacated by the city for falling into disrepair.

Chin hopes that shifting the burden of temporary housing onto landlords will prevent the Department of Housing Preservation and Development from passing stringent new rules governing applications for temporary housing, which she said would make it more difficult for tenants to apply and receive help.

Chin's measure would allow the city to require landlords to keep 10 percent of the building's rent roll in escrow, and the city would be able to seize five years' worth of that money if the building is vacated because of safety violations. HPD would then use that money to cover the cost of temporarily housing the displaced tenants.
Posted by Queens Crapper at 12:45 AM

Maybe for larger landlords. For smaller landlords you are taking a situation where the landlord is already not receiving rent because the building is declared unsafe by Dept of Building and having to spend money on repairs. A better alternative is better inspection and Enforcement by DOB to begin with, like that would happen.

Do you want to bet that the landlord known as NYCHA will be exempt from this law?

Before you rent to someone you should consider adopting them. When they leave you will have less responsibility for them than if you were their landlord!

with re: comment 1, the objective is that all landlords would establish the escrow so if a building were unsafe they wouldn't be forced to sell it to pay the relocation fees.

i work as an engineer in dealing with severely at-risk buildings, and it's difficult to watch the emergency declaration process in effect. DOB comes in, posts notice, and the tenants have 48 hours to remove their effects... because if they're not stabilizing the building within that time, HPD gets involved and they do it.

a lot of these buildings need the entire floor replaced (not flooring, not subfloor, the floor itself), so anything that the tenant doesnt retrieve within 48 hours at best ends up thrown carelessly in a storage unit and at worst ends up in a dumpster.

so to recap, these tenants move into a dilapidated building because thats all they can afford, then DOB comes in and gives them 48 hours to take anything they care about and leave. they can't afford a different apartment, they cant afford to move, and they cant afford to take time off their minimum wage jobs. so everything they have gets thrown out because of slum landlords. its hard to watch.

Your basement is unsafe now rent the illegals living there apartments, Its Coming.Works Both Ways.