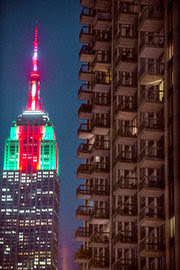 Last week, the New York Times asked "Why the Doorman is Lonely," in an article referencing new figures about New York City's oft-referenced excess of un-lived-in apartments. The upshot is that nearly one quarter of New York City apartments aren't used as primary residences, but are pieds-à-terre, or investment properties rented out to tenants.

So, nothing too surprising, but something else in the piece kind of throws off the narrative that these co-ops and condos are primarily left empty by jet-setting millionaires. According to Jonathan J. Miller, the president of the appraisal firm Miller Samuel, "the vast majority of pieds-à-terre are middle class... owned by people who have a studio in the city and a home in the suburbs, or maybe it was their first apartment that they chose to keep and rent it out."

I suggest reading that Times article because it has some pretty interesting info about how people evade property tax.
Posted by Queens Crapper at 3:55 AM

That was starting in the 90s - there's been an enormous loss of community in the city. And most of the mom & pop and interesting, artsy shops went out of business.

Sure, lets all move to Kansas or Alabama ...

Article states: "...owned by people who have a studio in the city and a home in the suburbs,.."
So this is how evan stavisky keeps his district leader post in queens and he lives upstate?

The mom and pop stores are becoming a rarity because affordable commercial rents are becoming a rarity. If Der Mayor wants to help small businesses, rent stabilization is needed to keep them from closing. Also big chain stores are burying them. Most people take their art entertainment ans look to buy artsy stuff online. This is the cyber generation. Too bad we can't live in 10 gigs of space in our laptops. Some folks already practice cyber sex...panting onscreen while they get their...well you get the picture. Chaplin's "Modern Times" needs to be remade and updated. God bless us all!

When rental rates for a studios in NYC cost about as much as some people make in a month....don't be surprised that there are vacant apartments. Oh, you're looking for a 1 bedroom? $2k+ a month?

I would rather travel an hour to get to the city then pay those outrageous rents.

Sure like in this big country, you're only options are Kansas or Alabama.

But the point made is true, there is nothing special about New York anymore and nothing to justify the high cost of living.

I left NYC after I retired from teaching for the NYC public schools. I moved to Smith Island in central Maryland. If I crave night life or bad attitude I head into Baltimore an hour away. I bought my house with a bay view for $225K. I know my neighbors and most of them are pretty nice. The streets are safe and the crime is very low. There are plenty of good jobs down here. I can't understand why anyone would want to live in NY it's too expensive and it's too much of everything. God bless you if you can stand it. Long live Queens Crapper! Long live my amazing NYC teacher's pension! Long live Israel!

I just don't get why anyone has a problem with this? Empty apartments paying property taxes? Lightly used pied a terre's paying property taxes? Lonely door men having well paid jobs? How is this bad? One way or another the city is packed with 8.5 million people, 1.1 million students in public schools.. Would people rather all these apartments be filled full time with people making demands for city services? Where are the 911 calls all come from? The half empty buildings in Manhattan which are guarded by privately paid door men, or the projects in Brownsville? Whose property taxes pay for all those police calls?

"But the point made is true, there is nothing special about New York anymore and nothing to justify the high cost of living."
Right on Joe !

My first thought reading, "nobody's home" was that this was about Paul Vallone"s empty dome.