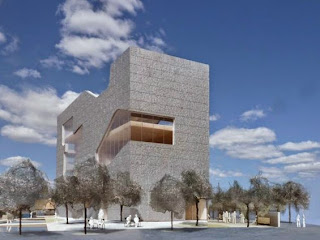 Construction of the library, which will be built at Center Blvd/48th Ave (next to Gantry Plaza State Park) was expected to begin in 2013. However, there have been several delays due to the inability of the city to find a contractor willing to build it for the $28.6 million that had been allocated.

The bids came in ranging from $33 million to $42 million and the city had to do some value engineering in order to find a construction company that could build it within budget.

Officials said that they had to get rid of some of the more elaborate features to reduce the cost by about $5 million. They included replacing the aluminum exterior facade with cement and glass; forgoing custom interior fixtures; and going without the geothermal well system.

However, the library will feature a rooftop terrace with panoramic views of the city skyline, a garden, a gallery, a conference room, a computer center and youth and teen spaces. The 21,500 square-foot facility will be largely a glass and cement structure.

Take a look at the renderings. Why all the wasted space?
Posted by Queens Crapper at 12:16 AM

You can't build anything from cement. Cement is just one component of concrete.

How about you suspend all new construction of Queens Libraries until the Peninsula Library is rebuilt? This library, one block from the ocean and one from Jamaica Bay was destroyed during Hurricane Sandy.
It is operating out of a double wide trailer, in extremely tight conditions and is not on the grid. No one can pay fines there as they can't take any money.

Why is that? Every other library, including the one in Far Rockaway that was NOT damaged in any way has been treated to renovations. Thomas Galante built a private patio and smoking deck instead of rebuilding Peninsula Library. Shame on you.

Spending on infrastructure for a library is short sighted. The current/future model will be a multifunction (meeting rooms, reading rooms, community center type model) with wifi and computer hookups. There is no need for a large building as the age of the 'library stacks' are over.

Building from scratch is just a handout to the city building department and the unions.

What happened to NYC being the cutting edge of technology?

The construction lobbyists want to get all these so-called libraries built before the taxpayers wake up and realize that a building holding books to be read and to be lent out is functionally obsolete and no new ones should be built.

If you want to argue that high-tech lounges with 100 person meeting rooms need to be built in Queens, let's discuss that, just don't call them "libraries".

How about completing the work on the Kew Gardens Hills library first? They tore the front wall off of the library almost 2 years ago. That's all, folks. No workmen have been seen in all that time. They keep a couple of work lights on to look busy, and have a couple of small 'Cats there to look as if something is actually being built. But NOTHING is happening. Meanwhile, we have a totally stinky, inadequate temporary library across the street in a rented small storefront. I have called our esteemed councilman Rory Lancman twice about this, and have received, "Well, they say that it's because blah, blah, blah..." Meanwhile, I have to drive a distance to use a decent library.