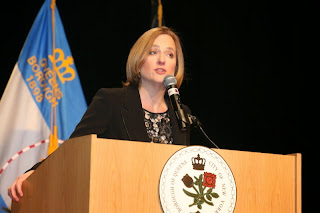 The BP is also proposing to create specific zoning designations for areas that are primarily defined by single-family row houses. She said she is asking for this because Queens is a Borough defined by neighborhoods and they must work to protect identities that each area has. Maspeth and Ridgewood are specific examples mentioned by Katz that would fall under this proposal.

Actually, much of the single-family rowhouses in question that were to be affected by this legislation are in Middle Village, Rego Park, Flushing, Bayside and elsewhere. Most of the rowhouses in Ridgewood are *at least* 2-family in nature, with the vast majority being 3-family or more.

Plus, a bajillion Ridgewood houses are now landmarked. So what the hell is she talking about?
Posted by Queens Crapper at 12:31 AM

Great Makeover - Face and clothes - Must be the Botox going to her brain.

In many areas of Flushing communities have been up-zoned, and single homes have been destroyed and replaced by high-rise buildings.

Sorry I think this article is not fare. She is right to ask those houses to be landmarked. In my opinion the entire Ridgewood, should be landmarked from border to border and along with Glendale (mostly done) and so on.

She isn't asking for Ridgewood houses to be landmarked (they already are). She is asking for a zoning designation to protect non-existent 1-family rowhouses in Ridgewood.

She wants to keep the integrity and identity of single family rowhouses, but is in favor of basement apartments being made because it's wasted space?

She needs to pack Queens with constituents who will vote for her in the 2017 primary against de Blasio.

By 2017 the socialist city council will have already passed a bill allowing illegal aliens and non-citizens to vote in local elections giving her a huge head start on the boy mayor and anyone else who challenges her. She is starting to ramp it up!

Also, betcha she is one of those behind Nolan for Speaker of the Assemble.

They ain't gonna landmark Middle Village and Woodside because the dead don't vote, at least not yet.

She refused to support landmark status for the Teylon theater.