Know where this was? 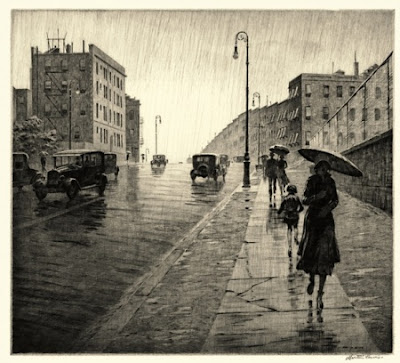 Does anyone have an idea where this is?
Posted by Queens Crapper at 1:04 PM

Don't know, but it's a really great piece of engraving!

The site doesn't exist.
Few highways, if any, existed in 1931 when the picture was painted and very few LIRR overpasses existed except in the western part of Queens.
The road could be Hunters Point Ave. going east from 21st. The eight/sixteen family apartment buildings emanated from the artists imagination. Warehouses would not have looked that nice.

This guy sounds like he knows what he is talking about, and he backs it up with evidence that can be referenced.

Woodside, looking westward towards Sunnyside. Up the crumbling bluestone sidewalk on Skillman Ave., Roosevelt Ave is at your back. The crest of the hill is the point where 54th Street zig-zags across Skillman.

At the time the work was made, it was a brand new neighborhood, carved out of overgrown farms and crumbling homesteads on the wastes lying west of Woodside. Check out NY Public Library’s Digital Gallery entry (Image ID: 725455F), showing the same direction from about a half block to the left. See also Image ID: 725454F, showing the sidewalk in the foreground of the print; photo taken from across the street, looking north.

The fenced wall along the busted sidewalk is the perimeter of the old P.S. 11 property. See it at the gallery: Image ID: 728232F (but not from the perspective of Skillman).

The foreground has been transformed, but all buildings in the print are still there. The first building on the left is the 4-story walk-up apartment building on SE corner of Skillman and 54th."

I know this street I took Driver's Ed from Mr.Altman and got caught is the same location, same rain, same eree light around 5 PM Ill never forget !!

Im sure, its Skillman Ave looking up the hill right ?
Donovans and the John Rocker Express would be behind you ?

I also used to play 70s at Finnigans Rainbow Room (RIP) WAY back with the old band...cheap old bastard RIP !!

Sharp commenters on the Ephemeral site pinpointed the location.

Yeah, the only place this would be in 1920s Queens, would be far west Queens-- close to Manhattan, the Queensborough Bridge, and Sunnyside Yard area. Kinda got a Bronxy feel to it, no? Great picture.

I knew it was Skillman Avenue near the LIRR station

It looks like Woodside Avenue at about 63rd Street, looking westward with the LIRR overpass bridge on the right.