That's one messed up vehicle... 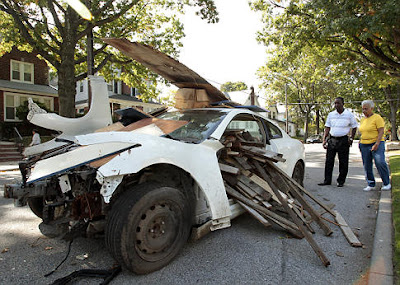 A mangled car that became a major eyesore as it lay discarded on a Hollis block for almost a month was finally removed Wednesday after a Daily News inquiry.

Frustrated residents reached out to The News earlier this week about an abandoned white Infiniti that looked like a remnant from a monster truck rally. They lodged several complaints with 311 and the Department of Sanitation, but the totaled vehicle remained.

The car, which had been stripped of its entire front end and stuffed with wood planks and garbage, was partially blocking traffic along 104th Ave. and causing passing motorists to do double-takes.

When The News contacted the Department of Sanitation on Tuesday afternoon about the junked vehicle, it "reinvestigated" hours later and the hazard was gone by yesterday morning.