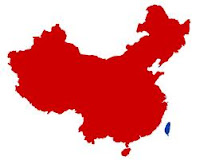 ...the Chinese people have had it up to here with a kleptocratic system of government that disregards their natural right to property ownership, and to the fruits thereof. Not to put too nice a turn of phrasing on it, it’s a system that robs them of their substance, to further a system that under the banner of communism is really another form of cozy, crony capitalism...

Two U.S. Courts of Appeals (the 5th and the 9th) have held in those words, that the American government may do just that — physically seize private land, and say to the protesting owner “Sue me.”

Still, be all that as it may, we experience a feeling of revulsion whenever we come across this sort of thing, where American law that is said to be the people’s government that is the embodiment of due process, fairness and equity, turns out in some ways to be not all that much different than the law of a barbaric government like China’s autocracy.

Only in eminent domain law!
Posted by Queens Crapper at 12:18 AM

The eminent domain law must be reversed and fought at the Suprem Court level to get it done.

Don't count on the SCOtUS to fix this. thanks to Bush they are now narrowly majority conservative...and THAT does not mean 'property rights' -for you. No, it means big business and major donors to conservative causes get the nod.

I'll bet Ackerman is an expert on this topic!!!

the Chinese people have had it up to here with a kleptocratic system of government that disregards their natural right to property ownership, and to the fruits thereof. Not to put too nice a turn of phrasing on it, it’s a system that robs them of their substance,

our Nation had a liberal/socialist President, House of Representatives and U.S.Senate, from 2008 to 2010.

a government dictatorship with NO CHECKS AND BALANCES.

can you imagine if SCOTUS became majority liberal/democrat ?

You'll probably feel the same way we did when several RepubCon Presidents appointed the majority of the Supreme Court Justices. It will happen between noow and 2016.

"Don't count on the SCOtUS to fix this. thanks to Bush they are now narrowly majority conservative...and THAT does not mean 'property rights' -for you. No, it means big business and major donors to conservative causes get the nod."

Response:
Utter nonsense! Totally at variance with the facts and a completely absurd example of Bush derangement syndrome.

The Kelo v. City of New London Supreme Court decision of 2005 was made 5 to 4 with the majority being the four solidly liberal members of the court:
John Paul Stevens (appt. 1975, Gerald Ford),

joined by the swing vote of the sometimes liberal or conservative Anthony Kennedy (appt. 1988, Ronald Reagan).

The minority opinion (all of whom were the solidly conservative wing of the court: William Rehnquist, Antonin Scalia, Sandra Day O'Connor and Clarence Thomas) was written by the Sandra Day O'Connor (appt. 1981, Ronald Reagan) calling the decision "Robin Hood in reverse" and also noted: "Any property may now be taken for the benefit of another private party, but the fallout from this decision will not be random. The beneficiaries are likely to be those citizens with disproportionate influence and power in the political process, including large corporations and development firms."

That is the position of strict-constructionist conservatives.

It would seem more likely that big government liberal statists feel the need for their crony big business friends to take private property for their own profit.

Furthermore, Bush had nothing to do with this decision despite it taking place during his presidency.

In addition to my previous post, I might add that George W Bush appointed Samuel Alito replacing Sandra Day O'Connor and Chief Justice John Roberts replacing William Rehnquist which did not change the ideological balance of the court and would not have altered the Kelo decision.

the "MASTERS OF DECEIT" on this site never quit with their lies.

citizens must remain vigilant and informed with the facts.

"Response:
Utter nonsense! Totally at variance with the facts and a completely absurd example of Bush derangement syndrome."

Read what was written. There will be no relief from this court in the future.

As for cutsey crap like "bush derangement syndrome" -that is right out of AM talk radio and Fox "news".

The Bush adm seeded not just the Supremes but as many of the lower and appellant courts with strict conservatives as it could get appointed.


I do "remain vigilant and informed with the facts," Gramps. That's why I don't accept what you say.

The insults start when you can't refute the facts?

do you still NOT believe that 47% of americans do not pay any income tax ?

Q.C and Yahoo Finance supported my comment as true.

can you convince us that we are still wrong , believing the facts.

the stress of democrat/liberal failure can be mind numbing.

The 47% of the people who don't pay taxes don'r because they don't make enough to pay or are retirees. Do you want to tax them or take away a lot of the loopholes that the corporate types (I assume that you're one of them) get away with?

Which proves nothing about anything. Case still open.

The stress of right-wing paranoia is astounding.

Here's apretty interesting article on who "the people who don't pay taxes" are:

there you go again "leftie liar". nothing but liberal/progressive nonsense.

did you donate to John Liu ? comrade of John Choe .

There you go again, Gramps. Insults when you're incapable of refuting a point.

Sorry to disappoint you. Never contributed to him; never voted for him. I stay away from sleazy operators.

You are hiding behind one case and trying to use that to deflect criticism of what the republicans have done to our judiciary.

Here read this excerpt of abook by
Elliot E. Slotnick, of the American Judicature Society

The Reagan adm instituted a policy of strict ideological vetting of judicial candidates. Various right wing groups have aided in this effort and the Bush adm continued this scheme.

did you not read "CAV'S" comments . you have been proven a liar. did you read the wikipedia analysis of "KENO VS.CITY OF NEW LONDON ". you are a liar twice.

once again you prove that liberalism is REALLY a illness.

Whenever someone resorts to parroting crap like "Liberalism is an illness" it shows that they have run out of facts and are parroting the propaganda they have been fed.

Do some research on the packing of the judiciary by conservative groups. Then ask yourself how you'd feel about this if you were a Liberal or moderate.

Judges are supposed to be selected on merit and fairness.

And once again, you prove that repeating the same thing over and over is the sign of some kind of mental disorder.

The Kelo case is one case. More often than not, court decisions are going to reflect the opinions of the appointments made in the Reagan, Bush and Bush administrations.

What I'm saying is true, Gramps. You're saying that if the facts do not conform to your beliefs they must be disposed of.

where is Obama's and Clinton's and Carter's moderate appointee's to SCOTUS.

liberal/democrat majority judiciary committee's have crucified every g.o.p. appointee, in the past. remember THOMAS etc. ?do i have to detail for you ? i will if you continue with this nonsense.

Bring up anything you want to talk about.


While you're at it, go ahead and talk about the accusations of conflict of interest involving Justice Thomas and his wife.