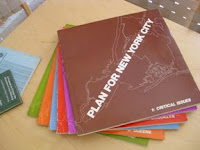 Each of the panelists endorsed a move toward what moderator Vicki Been, a professor at the NYU Law School, called the “Vegas principle” of zoning: “What happens in the building, stays in the building.” Zoning, they argued, should be more concerned with how buildings meet the public realm or impact public infrastructure than what people choose to do inside their property. “There’s nothing unsafe about having a business on the same floor as an apartment, if the people in the building agree to it,” said Michael Kwartler, a national expert on planning who helped write the zoning laws for midtown Manhattan.

When asked what she would change in the city’s zoning code, Jerilyn Perine, the head of the Citizens Housing and Planning Council and a former city housing commissioner, said “the word ‘family’ should be eradicated from the zoning resolution.” The definition of ‘family’ currently used in the zoning code limits the number of unrelated individuals who can legally share a single unit. The code “dictates not only how many people but who lives in places,” said Perine.

Kwartler and Perine, too, warned against over-regulating urban form, and especially against the current planning vogue for “contextual zoning,” which has been a hallmark of the Department of City Planning under Amanda Burden. “I hate this idea of contextual, this idea that what’s there should dictate what could be there in the future,” said Perine. Kwartler added that the Empire State Building is out of context with its surroundings, to the benefit of the entire city.

A renowned urban planner not on the above mentioned panel had this to say:

"So let's see: if I'm not mistaken, the thrust of the argument is deregulate (because that's worked so well in the past, particularly in the building industry); remove limits on the number of families or persons that can live in a particular space, so we can create more opportunities for greedy landlords to create hazardous conditions; create mixed uses anywhere to ensure a deterioration of our quality of life; and for God's sake, don't ever try to protect the character of a community through contextual zoning, because that's over-regulating the developers...errrr, over-regulating 'urban form.'

What a crock of shit."

For a different perspective on these issues, see this video of an Urban Planning panel at the New School which was taped earlier this month. (It's long but worth it if you're interested in urban planning):

Great picture at the top of this article-- those "Plan for NYC" books were a 6 volume set--from 1969. I know, because in 1974, my 7th grade friends and I trooped downtown to the city bookstore on Reade Street where they were giving away brand new sets-- as many as you could carry! The plan had already been abandoned. Huge waste of resources.

Very often their brains are scrambled!

"Publish or perish"....
academia's long time credo....
nothing has changed.

In this case what's been "studied" (LOL) and published is a load of....well....fit to be exposed as the BS it is on "Queens Crap"!

Perhaps fried(?) or worse---hard boiled! The yolk's on them! Y'all know eggsactly what I'm sayin'.

The cancer like influence of this sordid Cult of Development has eaten into the intellectual and cultural spheres of NYC pretty deeply - one is hard pressed to hear anything out of places like Columbia or Pratt anything more than mindless pro-development blather.

However, carrying a set of those books around is excellent cardiovascular exercise.