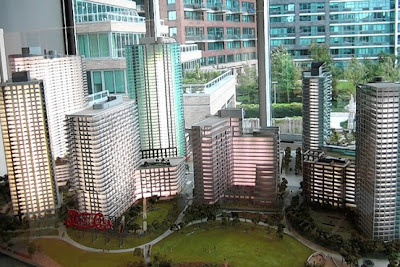 ...East Coast is an exercise in taking a neighborhood with very little residential identity or context to build from and building it into an area so grand in scale, so modern and sterile in feel, and so unlike anything that could be said be evocative of New York City, that it is still fumbling to find an identity.

The builders built tall, statement-making buildings on small footprints, surrounded by as much green space as possible, giving the whole community a classic Corbusian feel of towers in parks surrounded by highways (the Queens-Midtown tunnel roars open onto I-495.

The statement is one of underdog, pioneer indignation: There was nothing here, no roadmap to follow and little in the way of traditional context to respect, so we've built towers that are just as sleek as the latest glazed-over, thumbshaped behemoths in the city.

Hear that LIC? Your neighborhood didn't exist before the towers were built. And even though the developers allegedly had a blank canvas, they ended up building uninspired crap on land given away to them for nothing.
Posted by Queens Crapper at 12:13 AM

What a crock it looks like Roosevelt island to me.

Where is all the millions of gallons per day of raw septic this mini city will create gonna go ?
Perhaps the mayor will be dumping it on Maspeth

i LOVE WHAT MY BROTHER PETE HAS DONE WITH THE PLACE. ITS TIME FOR PETER TO PASS THE KEYS OVER TO PAUL AND IMPROVE DISTRICT 19. MOVE OVER HOLLERIN

Its a glass version of Housing Projects.

Actually the credit for this goes to Jimmy, Cathy, and Carolyn with the honorable mention of Community Boards 1 & 2 to say nothing about Queens Civic Congress doing their share to trip up local resistance to those parties.

Now they are about to do the same magic to the waterfront all the way up to Hallet's Cove.

I mean, one hospital (where there used to be four), an overwhelmed infrastructure (from transporation to sewage), a community built on a brown field that would make the Chinese blush, a FEMA floodplain that came within a foot of disaster this fall and shovelfuls of money thrown at Newtown Creek that has made the local civic community a surley group of cutthroats ready to bleed each other over scrapts rather than banding together to stop this.

Displacement and invisbililty is in the cards for the locals - nice thing for Americans to face just across the river from the UN.

All done by city planners that don't know what the hell they are doing, civic leaders that would make extras in a move One Million BC, and electeds that don't give two shits for the people who pay their salary and expect their interests to be served.

We want to see someone who can explain to us how all this waterfront development that we are subsidizing helps the people who already live here. And please don't say increased tax revenue for more services because we were fed that line years ago and the resulting development didn't do shit for us. In fact we have less services now than ever.

Once again, how does any of this benefit the rest of us who don't live there yet are having our taxes raised to pay for it?

A new school for people who just moved here or haven't even gotten there yet. Meanwhile, schools throughout the rest of Queens are making classrooms out of gyms and hallways. A new library? Libraries are being cut everywhere else, so why is this community special? Why a new public park here when there are so many communities throughout Queens that are already developed and need open space? This area already has Gantry Park and the Pepsi Sign Park.

Ferries serve a limited clientele who live right on the water. What they should be doing is improving MTA bus and subway service which the vast majority of us use. Instead, that's being cut while fares are going up.

Explain one more time how this subsidized development helps the rest of us.

"Explain one more time how this subsidized development helps the rest of us."

The standard boilerplate is that land in-use pays taxes -fallow it doesn't.

As for subsidies, look, landlords and developers run this City- especially with a republican billionaire mayor.

I remember in 1994 when the first renderings of a new tower for Hunter's Point were released. At that point most of the businesses down near the water were going out and the buildings were abandoned and beginning to be vandalized. It was a bit bizarre -this huge stretch of waterfront facing Manhattan and nothing but rusting factories and some dumped cars and refrigerators.

We had business on Vernon Blvd at that time and frankly, the area was a ghost town. At least half of the storefronts were empty, the subway stations were so deserted even the graffiti vandals didn't bother with them. Most people with business in that area looked toward redevelopment of the waterfront as something that would revitalize the area...and it has..just too late for us.

"The standard boilerplate is that land in-use pays taxes -fallow it doesn't."

These developers and buyers are getting a 25-year tax exemption so your boilerplate does not apply here. It's funny how several of the long-time LIC merchants that were there during the lean years were able to stay open - until now when the "revitalized" area they allegedly were yearning for put them out of business.

Long Island City was a thriving neighborhood - it was policies imposed on them from the same people behind this budding nightmare.

The community looked like shit because owners were warehousing their properties until the development plans were in place.

(See definition of 'Honest Graft' on the front of this website.)

In property after property on the waterfront the landowners of record decades ago are still there reaping the benefits of our tax dollars while our communities services rots around us and our infrastructure is overwhelmed.

What is needed is for someone in a community where the schools are overwhelmed, the library is crowded and the hospitals are closed is the ask their local officials why there is money for the rich white people in Hunters Pt thet have not moved there yet, but shit for the long suffering folks that have received the short end of the stick from the city for decades.

Oh yes, get the response on video and share the fun with the rest of us.

The people being displaced in western Queens - today LIC & Dutch Kills, tomorrow Ravenswood and Astoria, are invisible and unimportant.

The dark side of mindlessly supporting the machine.

They may give you a turkey for Thanksgiving but they own you hook line and sinker.

Q-C writes:"These developers and buyers are getting a 25-year tax exemption so your boilerplate does not apply here."

As I understood it, the taxes in that zone were then based on what the pre-construction (of new buildings) value was. It was 10 to as much as 25 years.

The issue of local older merchants being driven out is another direct result of no commercial rent regulation. Back in 1994-97 you could stand out on Vernon Blvd in mid-day and often not see another soul on the sidewalk north or south.

Look at the recent M Wells debacle. They stupidly signed a one-year lease, after they hit big with the flannel-Converse-beards crowd, the landlord raised their rent 3-4 times the original level and put in stringent other conditions.

Now, that location will go back to flop-of-the-month and become an eyesore again.

Do you have to have your cerebral cortex neutralized and your genitalia sterilized before you are permitted to enter one of these ice cold mediocre computer designed buildings?

Just wait until those buildings age a little and the fenestration gets compromised.

Even during just a series of moderate wind gusts....expect some falling window glass to pop out of its framing and hit the streets.