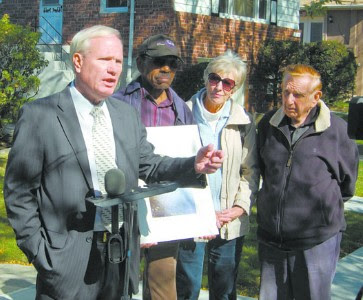 State Senator Tony Avella joined residents who live along 57th Avenue in Little Neck in calling on the Department of Environmental Protection (DEP) for the immediate installation of curb openings and additional catch basins to alleviate the massive flooding conditions that plague their neighborhood even after the most marginal rain.

Residents have been complaining to DEP for years that the current catch basins clog far too easily, leading to the flooding of basements and garages of at least six houses on the block.

Flooding of this area is recurrent and dates back to 1987 when the city installed sewers and catch basins on 57th Avenue after the settlement of a suit brought by the homeowners.

At that time, a private engineer retained by the homeowners, advised the city that their plans failed to provide adequate catch basins and the basins should be of a hook and hanger type.

The city ignored the engineers’ recommendations.
Posted by Queens Crapper at 12:33 AM

was not avella ,of staviskey dna, term limited out of the CM position ?

Anonymous said...
was not avella ,of staviskey dna, term limited out of the CM position ?"

Ahh there he is again, the snake-in-the-grass conservative peddling innuendo and slander....Why? just because Avella, a decent man is a Democrat. People like this old man would rather put a scoundrel in office rather than a Dem. Old Fool.

havent ya heard hes at the bar. just follow his social media and you will know.

when you choose to buy property located on a incline ,hills and valleys, mother nature will prevail. do not buy a house with a inclined driveway under the house. expect trouble.

my area is inundated with concrete crazies,who blame the city authorities when their property is flooded.

what is your nys senator(majority democrat) doing to release the NYS INITIATIVE AND REFERENDUM bill out of a stalled committee ? why won't the dems. permit the ELECTORATE TO BE HEARD ? this is his priority duty.
he is no longer a cm,and will never be mayor,even though he will never stop campaigning for this position.

the bill passed by a great majority in the nys Assembly,which is majority g.o.p./conservative.

avella's mentor, leonard stavisky, voted and was a advocate of FORCED BUSING for INTEGRATION IN THE 1975 PERIOD. His fellow traveler democrats,in queens, copied his votes. many families had to move or enroll the children in parochial/private education, at additional costs to their family budget.

in 2007, SCOTUS ruled forced busing, because of the color of one's skin is UNCONSTITUTIONAL. meanwhile ,the Stavisky's and his followers of ny wasted billions of forced busing tax dollars from 1970-2007.

are they birds of a feather ?

"the bill passed by a great majority in the nys Assembly,which is majority g.o.p./conservative."

"what is your nys senator(majority democrat)"

S-709,the nys bill for initiative and referendum ,sponsored by Sen. J. Robach, was passed on 7/7/11. (a majority g.o.p./ conservative senate)

the nys Assembly (majority democrat/progressive) has the bill for five months with no action.

speaker S. Silver today, said" the people should be heard", but is he telling the truth ? vote on the bill to "let the people be heard"

i made an error.... how did avella vote in the senate roll call ?

Look at all the legalize it appears that Halloran is participating in the comment section of QC. good work crapper.

Tony Avella is a legend. he does and says what he thinks and that is that. Toby Stavisky is an old corrupt crazy hag who only cares about finding business for her incompetent son.

Don't know, and since the vote of a Democrat in the State Senate is as important as a Republican's vote in the State Assembly, I don't care.

you just might be surprised that avella did not vote with DEMS. gianaris and stavisky .but they all know the votes are insignificant ,because the DEM. controlled nys assembly will never give the electorate the right to be heard on a referendum ballot.

the Queens Dem. machine has almost always permitted it's Bayside politician to vote a more conservative line, to fit in with the independent voters.


btw, DEM. Assemb. Speaker S. Silver made his "the people must be heard" statement about the socialist tools at OWS. what a gangster government in nys ?

It's very convenient for people to vote anyway that they want when they are in the minority and ignored. The Democrats in the Senate are ignored; the Republicans in the Assembly are ignored.

It will stay that way for as long as there are no statewide term limits.

In effect, two people castes - Skelos in the Senate and Silver in the Assembly.

Is not incumbent dictatorship grand, Gramps?

And the points that you are making are relevant to flooding in Little Neck in what way?

the LITTLE NECK,N.Y.C flooding problem ,if it is a nyc responsibility ,should be the CM 's sphere of influence.

what can a NYS senator do ,except call a queens weakly for another photo op to campaign for the next nyc mayoralty race.

when he sees a free rent a crowd, he will always appear.

i hope he can get the home owners some action, but as in the past, no one will respond to him in N.Y.C. government. except his former black panther cm voting pal, Charlie Barron.....

,if it is a nyc responsibility ,should be the CM 's sphere of influence.

Yes it should, thats why Im writing in Al Centola in the next election.

Now that is a very good question.

Enough with all this hack bullshit

AL CENTOLA TO SAVE NORTH QUEENS

Who holds the record for the most press appearances....
John Liu or Tony Avella?

Who shall we crown "Prince of The Photo Ops"?

If Avella were truly a legend then his bills would have been passed instead of remaining "intros".

In the meantime, we're all passing water waiting for things to improve in Queens.

Can I please use yours?