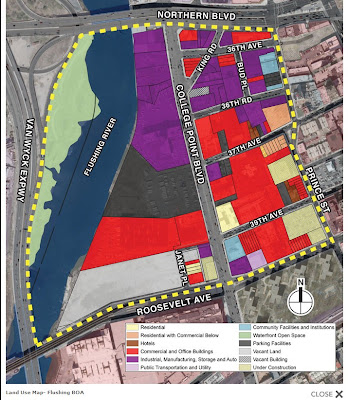 The program is a community-driven economic project that will revitalize so-called ‘brownfields’ – any property which would have complications with redevelopment or reuse because of the potential presence of contamination.

The program would promote greater connectivity and a more seamless transition for downtown Flushing and the BOA area, which is about 60 acres from the Flushing River to Prince Street and Northern Boulevard to Roosevelt Avenue.

The “educational, informational, and conversational” neighborhood meeting, as it was described by Joseph Farber, chair of the LDC, had a turn out of about 20 people. President and CEO of FWPCLDC, Claire Shulman, introduced a group of “very sophisticated and intelligent” consultants on the project, including Assemblymember Grace Meng and Kim Matthews of Matthews and Nielsen Architecture.

The open house was the first of three that will be held over the next year to get feedback from residents, many of whom had no idea what the BOA Program was.

By 2013, the FWPCLDC hopes to see its goals of ensuring that “the BOA area becomes more integrated with downtown Flushing and this stretch of the Flushing River becomes a vibrant, accessible public resource,” said Roberts, adding that providing affordable housing is high on their list of priorities.

What's Claire's take on the investigation into her illegal lobbying?

Shulman said Tuesday she is glad Schneiderman is looking into the lobbying claims so that the issue can be put to bed.

“The attorney general has this. Hopefully, he’ll make a decision about what it’s all about. And it’s not just us. It’s the Economic Development Corp., who also lobbied, but they came after us, even though I was told I could lobby, so I finally registered. It’s going to be adjudicated to its final outcome now,” she said Tuesday. “With this project I’ve got to move forward, I’ve got to keep moving, and hopefully we’ll strike oil.” 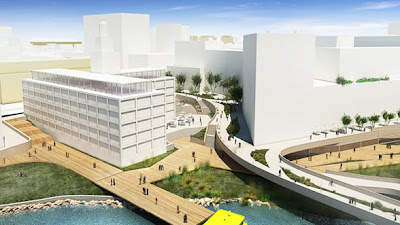 He was formerly a CB# 7 member who sat on the board of Standards & Appeals and currently head of the "Chinatown Partnership"....
appearing in a photo to the left of shady John Liu in a recent NY Times expose of NYC's "esteemed" comptroller!

Where's Claire's burial plot to be....on the west embankment of the Flushing Creek beneath the pedestrian bridge?

I hope I outlive her so I can piss on her grave!

This looks great. The sooner the better. The area is a disaster now, and this development will bring jobs to the area, as well as clean up Flushing Creek.

So,
it looks like somebody just bought themselves a brand new "Windows #7" compatible architectural design program....and will you look at all those pretty colors!

This rendering almost makes me want to skinny dip in the Flushing Creek....LOL !!!

Where are all of the "Welcome To (Wellington Z. Chen's) Welling-towne" banners?

I wonder who's gonna cut the ribbon on opening day?

She might be pushing up stink weeds by then.

TDC will probably import coolies from China to do the work.

None of this will be built on such a grandiose scale as depicted here.

The Great Recession is growing and the Chinese are yawning at the prospect of investing their Yuan in a faltering area.

It's much wiser for them to buy up LIC waterfront, which is closer to the heart of NYC....Manhattan.

It's a blue chip investment for China, instead of investing in junk bond caliber Flushing crap.

what smells here is more than just that waterway

How long until we read the headlines about how people are getting sick from living and working in those buildings because they neglected to actually clean up any environmental damage.

“the BOA area becomes more integrated with downtown Flushing and this stretch of the Flushing River becomes a vibrant, accessible public resource,”

vibrant - don't you just love it everytime they use that word.

Instead of saying that the area will be filled with even more crap and be screwed up even more, they just say vibrant, lmao you gotta love these people.

The attorney general has been bought and paid for with laundered overseas Chinese money already dispensed to him by the Shulman group.

And what a group it is!

I hope this piece and the willet point can fill up Clair's hungry tommy.

Look at those pretty colours on that map. And the other cartoon is hilarious.... Where's the Van Wyck? Northern Boulevard? College Point Boulevard? Cars? Trucks? Chinese signs?

I'd love to be at the unveiling of her tombstone.

Could she possibly smell worse then as she does now?

(This is not a veiled threat.
All is said in jest).