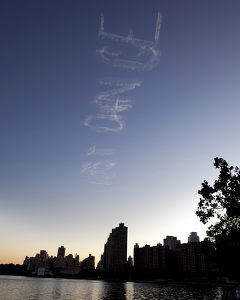 "The arts are supposed to generate conversation but not apprehension and fear," said Councilman Peter Vallone Jr. (D-Queens), who heads the Council's Public Safety Committee.

Artist Kim Beck chose three slogans she had gleaned from advertising billboards and hired a plane to skywrite them. The project was sponsored by Friends of the High Line, the nonprofit behind the wildly popular elevated park.

One mysterious message, "Last Chance," sparked terrorism fears in some New Yorkers, who took to Twitter to express their bewilderment.

Organizers of the project defended it.

The High Line's website says the park's public art projects receive taxpayer money from the city and state. The group received $75,000 this year from the City Council for public programming and other uses, records show.

But the park's website was changed Monday to specify that the skywriting project was privately funded.

This is interesting. Why are taxpayers funding Friends of the High Line, when they defaulted on their agreement to privately raise the funds necessary for the maintenance of the park if it was built? And what is the Friends of the High Line doing funding "art" when they haven't paid their debt for the park yet? Last time I checked they were threatening to tax the businesses along the strip. I don't think the skywriting is the looniest part of this story...
Posted by Queens Crapper at 12:57 AM

What the hell is wrong with us...Why are people so scared.

I was down in Chelsea on Sunday, all of a sudden people started looking up and frankly most looked a bit unnerved. A lot of Asians including the two I was with took pics w/their phones.

I asked them if they had seen skywriting before. Neither had.

Really folks, grow a pair and stop letting some filthy A-rabs in caves intimidate you.

This country could destroy the world in a matter of hours....There is nothing, and no one we should fear.

It is a sin. The money could have gone to feed homeless. What a joke Bloomberg patron of the arts has backed largest tax payer $ of bad art and no one seems to know our sitting mayor and gang have immunity Haggerty trial -- Mike perjured himself 3 times in court not protected by immunity and carries jail time like breaking campaign laws!

I agree with Councilman Vallone! This clown should be grounded and have his license removed."Why are people so scared"? Where the hell have you been hiding?

The real crime is not Bloomberg - a short despot is generally the laughing stock of myth and legend.

The problem is how the elites in this city, not the whiskey soaked ink stained 4th estate, or the laughing stock that generally stands in for elected officials, but people that should know better.

They stood aside, mute, while this clown co-oped the system and is proceeding to make mess of our city.

As someone said before, this man is a modern day Robert Moses. And as the elites finally where the only ones with the power to dispose of that character, so they must with Bloomberg.

Those 1000s in Match on Wall Street are no joke and they had better wake up.

Note how Vallone is involved in every oddball half cracked issue yet can't seem to do anything of substance for his community as it slowly slips under the waves?

The Vallone Dynasty is in its last years.

Notice how the Vallone hacks make it our fault for the mess Astoria is in.

Instead of these wild flailing about of arms to get attention, how about a few moments walking around the community if he had nothing better to do.

Should give him plenty of time to figure it out.

In Middle Village Sunday afternoon , I saw two Muslim looking men, staring into the sky...after 911 it draws suspision.... Even my kids saw them, then they looked up...and saw the skywriting....One of the kids says ...."Oh yeah now they will try to get one of those planes".Thats the way it is now and I am not going to apologize for it.