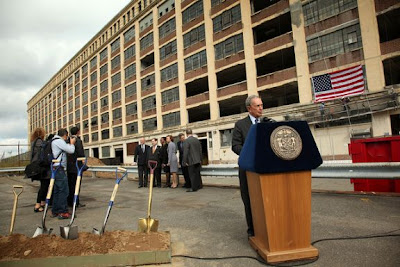 It’s a dirty job, and Mayor Michael Bloomberg’s apparently tired of it.

During a ceremonial groundbreaking Thursday in Sunset Park, Brooklyn, where a developer will turn the vacant Federal Building #2 into a new industrial center, Hizzoner griped about having to shovel dirt – a mock ritual done at such events.

“I can’t wait for the last one. You have no idea,” Bloomberg reportedly said after rolling his eyes.

Considering some of the crap that he's been shoveling at us, the smell was going to get to him sooner or later.

If he is tired then by all means please quit. Please Bloomturd just leave already.

None save the beneficiaries of your confiscatory largesse would begrudge your long-overdue leavetaking. Adieu, mon Kupitan!

Just resign now if that's how you feel.

Will you look at that golden shovel hizzoner uses to sling shit in our faces!

Oops, gotta run....time for me to take a real quick dump....inspired by Bloomberg's face appearing here on "Queens Crap".

Do you mind "Crappy" if I use your bowl in this emergency?