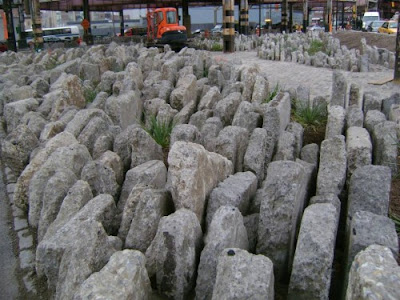 Up until Oct. 26, city residents have a chance to submit to the city Economic Development Corp. potential names for the Long Island City open space that has been created at the intersection of Queens Plaza and Northern and Queens boulevards.

This part of the neighborhood is at the entrance to the Ed Koch-Queensboro Bridge and a short walk from skyscrapers with offices for both private businesses and government entities.

“Everyone knows that New Yorkers are full of opinions, so who better to ask to come up with a great name for the greatest new open space in Queens?” Bloomberg said in a statement.

The EDC is asking for submissions that reflect the site history, neighborhood, natural environment or location. Names of individuals and corporations are not allowed, the EDC said.

How about Concrete Crap Park? Dead Trees Park? Millstone Mall? Go ahead, have some fun.
Posted by Queens Crapper at 12:28 AM

With what Bloomberg has done to our city, the fact that its at the mouth of the entrance to "the city', and it so aptly looks like tombstones. Why not name it, Bloombergs mayoral vision of the outer boros plaza.

How about "not the Ed KocH" Park? And "Certainly Not the Vallone" Park

How about "Liu Plaza".

Then NYC Comptroller Liu can install a toll booth to collect Commie Yuan which can be then used to bribe local officials just like they do in China.

Tommy Huang once bragged he had a "back door" to city hall.

I thought the Greeks invented that one....LOL!

A minor correction:
I think "cemetary" is spelled "cemetery".

I suggest to engrave all the names of the kings of crape on each of those concrete crap.

Bravo! Put them up there
for all to see. List Bloomberg's
name next to Khadafi.

The Vale of Vallone.

Crap Valley? Crappy Crapness? or
Looks like Paper Bags but is full of Crap?

How about "Disolving Millstone Mall"

In the absence of any shelter, the winter elements and road salt will destroy those artifacts more quickly than you think.(Salt mixes with melt-water and is kicked up into a fine spray by tires and wafts considerable distance in the breeze. This concoction is deadly to any sort of masonry.) Significant damage can be expected in a year or two if the vandals and Volkswagens don't get there first.
A great spot for priceless masonry artifacts don't you think?
Well Done, George!, Really, well done. You have pushed yourself entirely off the stupid-crap-o-meter's scale!!!!

What is next - because the city wants to promote West Side development are they about to move Cleopatra's Needle from Central Park to the entrance to the Lincoln Tunnel so more people can see it? (the reasoning EDC wants the millstones at Queens Plaza instead of a museum)

This travesty is a major blow to the city's credibility as a serious cultural cultural mecca.

Nothing is sacred - even the crown jewels of our past are sacrificed on the alter of devopment.

I want everyone who drives by this to remember two things.

1. You are being displaced. The association of the mlllstones with the Paytnar Family or Dutch Kills will be loosened as the real residents will not have a major role in this affair. The crew at Why Leave Astoria or Gantry Park - clueless kids who do stupid things like moving next to a very active train yard - will spin all sorts of cute names - and will get all the attention - an as Old Astoria became Two Cove, Triboro became RFK, and Queensboro became Ed Koch in their little minds, the displacement and re-branding of our community continues.

Remember the politicans showed up at Noguchi's little event last week that was filled with Manhattanites 'envisioning' our waterfront, while locals concerned about failing schools and services were absent and invisible.

Ed Koch Park? I have a better idea. Why not refer to this new park as Queens Plaza? That's what most people call it anyway.

And even if it were renamed after a politician or celebrity, most people would continue to call it Queens Plaza.

The same way that the RFK Bridge is still Triboro and the Ed Koch is still known as the Queensborough to most local residents.

Our elected leaders never seem to learn that geographic-based names resonate better with travelers than names based on personalities.

Sergey, you make the other side's point. Most people call the Ed Koch the Queens-BORO, its real spelling.

Who the hell cares how it's spelled? Verrazzano is spelled wrong all the time. Actually, "Queensboro" is a grammatically incorrect spelling.

Sergey, you make the other side's point. Most people call the Ed Koch the Queens-BORO, its real spelling.
-----

Lets bring things back in focus.

The media outlets, the official publications, and the hipster newbies call things by the party's name.

Only Archie and Edith call it by the correct name.

Like the community's input into the millstones, or St Saviours, or just about anything discussed here, they are ignored and for all intents and purposes, invisible.

Maloney was walking around the Dutch Kills street fair with Van Bramer telling everyone that would listen "I saved the millstones!"

That park is seriously the ugliest thing i have ever seen. What the fuck happened? Who thought standing broken concrete on it's side would be a great idea? Please shoot the designer.

Indeed, it is unfortunate that the local press acts as an enabler by using the Ed Koch and RFK monikers in their stories. Perhaps when I become an editor, a spade will be called a spade again.

If I miss my turn...
my VW might wind up impaled upon this medieval castle defense system.

But it's a great flying paper debris catcher!

I just submitted "Homeward Bounds" inspired by the Simon & Garfunkel song, but pluralized to make it sound more gentrifantastic.

I hope we remember that City Planning Penny Lee is responsible for this and when it falls apart within a few years that the city appropriately responds.

the poor plants are going to die from all the car pollution emitted in that area. who's idiotic idea was it build this park? dumb ass..