BSA sides with developer (what a surprise) 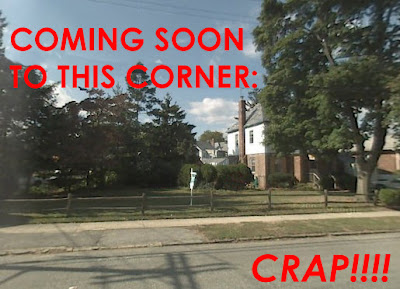 After a long drawn out battle, the Bayside Hills Civic was finally defeated at the Board of Standards and Appeals hearing regarding an application for a zoning variance by developer, Paul Bonfilio.

Residents everywhere are steaming over the decision.

The application made by Denis Forde of Rockchapel Realty, LLC., and architect Paul Bonfillio was approved this afternoon by a vote of 6-0 despite fierce community opposition.

The location, at 50-20 216 Street, Bayside, NY has been a source of problems for concerned residents that want to preserve the character of their neighborhood by resisting development.

Michael Feiner President of the Bayside Hills Civic said the decision will have unforetold consequences on the shape of the neighborhood.

Do you think the people that built our fair towns with their skilled hands, who took pride in their work all those years ago, are rolling over in their graves at what has happened to them due to fly-by-night developers looking to squeeze every dime out of their properties?
Posted by Queens Crapper at 12:58 AM

Yup, Paul Bonfilio, former VICE CHAIR of the BSA.
How's that for conflict of interest???

"Do you think the people...are rolling over in their graves...?"

Crapper, we're approaching the 5th anniversary of this blog. You asked this question in one form or another 5 years ago. (And Shenkler is still publishing his whore ads too.)

Has anything changed in those 5 years?

I sense an air of Weltschmerz in you.

Didn't Paul Bonfillio once work for the DOB?

"Crapper", if you decide
to shut down "Queens Crap" (please don't)....think of resurrecting it with a replacement like:

These incumbent dynastic brigands (Republican or Democrat) are responsible for all that's ill within our nation!

The over development train has finally reached snooty Bayside.

Please watch the gap as you exit.

Enjoy a taste of Flushing.

And many years ago you all bragged that this would never happen in your tony town.


That's exactly what the crooks (Ackerman, Shulman, both Staviskys etc.) want you to do. Therefore keep up the good work and plan to stick around for a 10 year anniversary!!!

Let's face it, this blog is the first time any of them have ever been criticized by the local media. It's not like the weeklies will do it.

Don't shut your blog, crappy! It takes time for people to understand that they must work outside the current corrupt political system. We are surrounded by worthless politicians and others waiting in the wings, but all of us who believe in our communities must stay the course and fight.

"Let's face it, this blog is the first time any of them have ever been criticized by the local media. It's not like the weeklies will do it."

Yes, this may be true but still the people of Queens, even regular readers of this site, go out and re-elect the same pols anyway. Then bitch about the pols and their antics.
And the pols probably get a chuckle out of this while sending their meat-puppets to troll the site.

It's like the old saying: You can lead a horse to water....

Crapper, where's does it hurt?

For those of you who don't get it, the Crappers' posts and the comments are seen by more than just people in Queens. I can say unequivocally that city-wide media reps read this site and get their stories here! Two examples are the Daily News stories about Ackerman and the relationship to the Zises family and his ill-gotten gains and also the RKO's trials and tribulations which generated a report on WCBS-TV. I'm sure the Crapper could cite many more. As usual, georgetheatheist is speaking with his head up his ass! Just sayin'...

I thought Bonfilio was with the Department of City Planning.

this blog is the only only real public voice of the queens citizens. the leftwing weaklies expect a name on a editorial letter,or they will not print it. that is dangerous ,when one lives in a dictator controlled, dem/liberal/socialist community. their irrational social engineering illness causes them to act violent and vicious, when opposed.

i have experienced this when i challenged their nutty plans publicly. anon. at this time is needed and our message will be heard also.

On Oct. 23, 2008, City Council passed a law that extended term limits for Mayor Mike Bloomberg and Christine Quinn. Quinn herself strong-armed the change of law in a self-serving attempt to save her career after her slush fund scandal exploded across all of the city's newspapers.

We are gathering at City Hall Park on Sunday, Oct. 23, at 2 pm to mark the third anniversary of the "Day Democracy Died."

Activists will make speeches and pass out voter registration applications to help vote out the City Council members, who passed the term limits extension.

http://christine-quinn-sold-out.blogspot.com/2011/09/oct-23-term-limits-rally.html
posted by Suzannah Troy Please come if you can

Well Eastern Queens, I guess we all are prisoners of Dutch Kills now.

I hope your councilman will be more useful than Jimmy No Brainer who just squeals with delight every time he sees 15 story buildings next to two story homes. Never has stopped by to talk to the people in the community about this. But his focu$ is in different direction$.

You ignored us thinking that the 'Wild West' will get all the development.

All you did was give the bastards a chance to hone their skills.

Kudos to you---
stirring up the waters all these years---bringing the foul mud and various bottom feeders to the surface.

I've been on the job---
watch-dogging the RKO Keith's since 1986 and have faced many similarly discouraging moments.

Yet, here I remain!

As Yogi once so elegantly proclaimed, "It ain't over 'til it's over"!

Please DO NOT give up the ship
or the ballgame!

You remain the only unfettered voice of the people left in Queens---rough as those voices might appear at times.

So very often the truth abides in crudity of language.

If we but have the courage and wisdom to just listen---we might gain some valuable insight.

Wonderfully said Jerry.
Yourself and the people who run this blog are among the true heroes of Queens.
Semper Fidelis.