Lack of FAA clearance apparently not a big deal 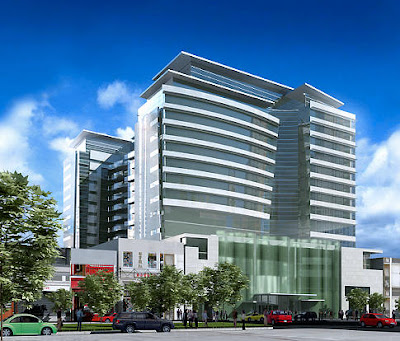 Queens newspapers reported the FAA had "thrown a wrench" into the plans, putting the ambitious project - already approved by the Board of Standards and Appeals, which oversees zoning requirements - "in jeopardy" and "in peril."

But the decision carried surprisingly little weight because the FAA does not have authority to block construction of a building, even if it feels the height presents a danger to air traffic.

"There is really no teeth in the law," said John Mogul, an aviation consultant hired by the developer of the RKO Keith's project.

[Thompson] still expects to begin work next year and finish the project by early 2015, but it remains unclear how tall the project will be when it's completed.

But the case highlights an issue with significant implications in Queens, home to the city's two airports and plenty of nearby development soaring skyward.

The FAA asks local zoning authorities, like the city's Board of Standards and Appeals, to consider whether a project has the FAA's approval before giving it a thumbs up.

But the fact that the FAA alone cannot halt a project it finds hazardous has led to calls for reform.
Posted by Queens Crapper at 12:02 AM

It this building is so safe, then Donald Manes' "bag man" Michael Nussbaum should move the "Queens (whore ad) Tribune's" "Multi Media" offices into the top floor of this already-out-of-date-looking architectural atrocity!

Take Mike Shenckler and Gary Ackerman with him!

The sword of Damaclese hangs precariously poised above this folly.

It seems that practically every federal "watchdog" agency....be it the spineless EPA or the nutless FAA....have no teeth in their jaws.

They don't even possess a menacing bark to their credit.

So why all the expensive pretense of having these agencies exist at all?

Abolish them and save us some money!

Were in the midst of our growing "Great Recession" and should consider employing some austerity measures.

That's right-- the FAA has no ability to force anyone to take down a building. But, the joke's on the developer. The market will kill this project-- no sane person will want to live in a structure that is a hazard to landing air traffic. The first time a jumbo jet flies over this thing, expect prices to drop very quickly!

Thompson's public relations pimp Michael "Nussie" Nussbaum lives in Jamaica Estates....far, far away from any plane that might fall from La Guardia's skies.

It's funny how all of these recycled Manes proteges are still around controlling the borough.

The Donald Manes playbook of corruption still sets the rules for Queens....and its residents be damned1

Of course, the asians dont care about life safety. These are the people who built skyscrapers at the end of the runway in Kai Tak Airport

The Daily News must have missed this sentence in the original story:

Although the FAA cannot stop a project, it is unlikely such a development plan would be able to get insurance.

And anon2: it's Damocles.

I stand corrected
on my "Damocles" spelling.

I suspected I had it wrong, but
there that sword hangs, nonetheless!

A lingering question
resounds in my aching head:

How long can the landmark ticket lobby and grand foyer survive, if nothing is built around it to ensure its preservation and restoration?

Unfortunately and realistically speaking---it can never become a theater again.

The Shul-Manes administration saw to that---with the help of their demolition company, "Huang The Destroyer".

Donald Manes first sandbagged efforts to landmark the whole interior of the Keith's back in the early 80s.

Why ever did Thompson choose "Nussie" as his PR man out of all others available?

Something still stinks in Flushing besides its polluted river regarding this site.

Having a limited development background (only 3 buildings to his credit in Manhattan)....could Thompson be just a "White boy" front man for an Asian developer who's waiting in the wings?

When the FAA eventually gets "persuaded" ($$$$$$) to grant an OK for the project....will the property then get flipped to another owner?

2 prominent players from the Manes days.

DO NOT underestimate the remaining power they wield...cloaked by their relatively unobtrusive Ninja like presence!

Everybody always gave...and still gives the Keith's good lip service...from CB#7 on up.

Verbally trashing the Keith's is highly risky. That could kill an election for someone by enraging voters who hold it dear.

But the reality is that Manes' stooges didn't give a damn to ensure that this community asset got preserved for alternative reuse.

It stood in the way of building a Chinese business satellite, a zone, an exclusionary overseas colony in Flushing.

So it was to be sacrificed for the purpose of increasing the real estate value of its property owners.

From top to bottom...the whole town, borough, it's historical societies and pols, etc. should have pulled out ALL the stops to save the Keith's but they didn't.

They merely went through the motions and pulled their punches instead!

Now tell me that I'm wrong on this!

P.S.
I'll bet some of you lazy, sell-out CB#7 bastards would just love to know my identity...h-m-m-m?
Well, you can piss off while you're busy guessing!