City cracks down on billboards 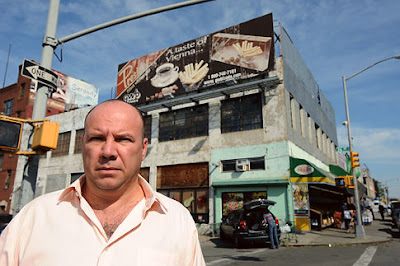 City business owners say they are losing hundreds of thousands of dollars a year because of a newly enforced law restricting advertising on buildings and along highways.

The city's Buildings Department has been cracking down for more than a year, issuing $25,000 fines to the owners of billboards and signs hawking everything from McDonald's burgers to cell phones.

In 2006, the city adopted tough laws limiting the billboards. Officials say the jumbo ads are a safety hazard because they distract drivers.

Billboard owners and small ad companies sued the city, slowing down implementation of the laws until last year, when a judge ruled the regulations limiting the signs could be enforced.

Since then, businesses ranging from companies that hang the massive roadside billboards to mom-and-pop shops that own the signs on top of their stores have been affected by the loss of income.

Not sure how I feel about this. On the one hand, the signs are unsightly, are often in inappropriate locations and serve as a distraction. On the other hand, I would rather DOB go after shady developers with as much gusto.
Posted by Queens Crapper at 12:05 AM

This is a quality of life issue. These ads sometimes racy, are eye pollution and are distracting to drivers. glad to be done with them along the LIE especially near on on the way to the Midtown tunnel. They belong more so in Times Square - not Queens.