Toby pretends district lines are not her fault 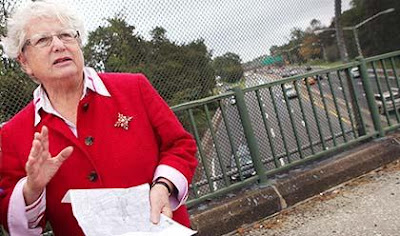 The Queens lawmaker who has one of the most clearly contorted boundary lines in the borough wants to take redistricting power out of the hands of politicians.

It is barely contiguous, which is required by the state. Between Clintonville and 148th streets in Whitestone, her district is actually just the Cross Island Parkway.

“If I walked the perimeter of my district, I would get hit by a car,” she said, standing on a crosswalk high above the thoroughfare.

And Stavisky knows who created that monster.

The corridor-like portion of the district was drawn in 1992, before Stavisky took the seat, she said, ﻿by the state Legislative Task Force on Demographic Research and Reapportionment. The parkway serves as an umbilical cord connecting the Democratic neighborhoods of Beechhurst and Bay Terrace to the main hub of her Democratic district in Flushing.

By connecting the two neighborhoods to the 16th District, the committee took them out of the neighboring district, which was then held by former Sen. Frank Padavan.

Padavan was a Republican, and since the neighborhoods in question typically vote Democratic, they would have hurt his chances for re-election, according to Stavisky, which is why they were removed. But the Democrats benefitted as well, since the addition of the neighborhoods made the 16th District a deeper hue of blue.

You were elected in 1999. What about the 2002 redistricting? Why didn't you do something about it then? Why didn't the newspaper point this out?
Posted by Queens Crapper at 12:27 AM

Hey Toby! While you're at it, how about explaining those unusually large donations you make to the North Flushing Senior Center?

Huh? What do you mean I should mind my own business? It's OUR money that you're using. Oops. I hope that members of the press aren't reading this. They might actually look into how hundreds of thousands of taxpayer dollars are going to the center.

BTW Anything happening in the grandma department?

“If I walked the perimeter of my district, I would get hit by a car,”

What a vivid image I just got. Imagine her running?

Is she talking about her district lines or her body silhouette?

Both are in serious trouble!

Who can forget this blast from the past? The comments are worth reading again:
http://queenscrap.blogspot.com/2010/09/thar-she-glows.html

Go QC! No wonder why the media come here to get their news leads!!!

Is she protecting the seniors or her personal piggy bank???

Those district lines were drawn so that she, and her husband before her, could continue to live in Beechhurst.

How old is she? Shouldn't she be in a retirement home? Term limits for ALL politicians. After 2 terms they become ineffective and lazy and only care about THEIR personal agendas.

And why does her son Evan live in Rockland County with his wife, the Chairman of the Rockland County Democratic Party, but he still claims to live in Flushing and runs for District Leader?

Are there any lawyers out there who can explain if that would be legal?

did she also initiate converting P.S.169 Q in BAY Terrace from a K-5 to a K-8 /with BELL Academy ,so local protected pupils did not have to bus to FAILING I.S.25 on F.L.B.@35 Avenue . where their pupils would have to share the building with 6-12 grade pupils from the borough. was safety an issue at I.S.25 ?

why can not all the pupils be CHOSEN ?

District lines can't cover up the stench of Stavisky corruption. Investigation anyone?

So whose gonna run against her?

TONY VS. TOBY IN A DEM PRIMARY
INTERESTING

What hypocrisy. Redistricting can never be taken out of the hands of politicians because anyone with the brains to actually draw a map is going to influenced politically. The map of 1992 could have been changed in 2002 - I guess she thinks we're that stupid.

Parkside wins. Everyone else loses!!!

Toby, tubby, Toby.....How much money have you and your son received from John Lui's contributors? INVESTIGATE!

In more than 25 years actively working in and with civic organizations in the Flushing area, I have never met anyone who has ever been in the Stavisky's (Lenny and Toby) office. I do ask, if only out of curiosity.

I recently went to the address that was on a mailer from her office and there was not a sign or any indication that there was an office in that two-family home on Willets Point Boulevard.

I find it odd. She's a peculiar duck.

If there is any reason for term limits it's Toby Ann Stavisky.

The two Toby's going head to head, old Toby is 74 years old, Issac Sasson is 72, John Messer is 48, Toby Avella is 60, Robert Schwartz is 57.
Last year Toby annointed the NFSC with $1,200,000, while unfunding all the other centers in her district. Evan's wife and her husband and kids live in New City, Rockland County, where she is the county Democratic Leader, her brother is a State Assemblyman, Evan is an elected democratic district leader in the 26th Assembly District He says he lives at 29-30 138th Street Apt 4D, with his wife and kids, they also live in an apartment in Manhattan, as does Toby, and she also lives in Greenwood Lake New York. His wife is an attorney working for a community college in Rockland. Toby gave all of the Leonard money to her soon to be father of the bride (Karen Z that is, Evan's wife) The father was the orange county democratic leader and a local legislator. If we lie we get caught, if they lie, they judt pay them more money, like the Parkside Groups several Millions from the state senate democrats.