Yep, site of fatal Bushwick fire was an SRO 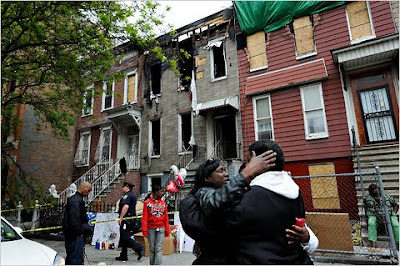 A Brooklyn row house where two men died in a fire on Friday night was an improvised boarding house, fire officials said.

The officials added that that the three-story, nine-room building, on Covert Street near Broadway in the Bushwick section, did not appear to have a certificate of occupancy that would allow it to be used as a single-room-occupancy residence.

The fire started on the second floor when someone cooking with a hotplate accidentally set fire to a bed, the officials said. “Occupants then made an effort to extinguish the flames,” said James Long, a Fire Department spokesman. “They used a bedspread and curtains.”

When their efforts were unsuccessful, Mr. Long said, the occupants fled, leaving the bedroom door open, and allowing the fire to spread into a hallway and travel upward. Two men on the third floor were trapped by the smoke and flames, Mr. Long said. One man either jumped or fell from a window and died. The second man was found dead at the top of a staircase.

Tony Sclafani, a spokesman for the city Buildings Department, said that the agency had received three complaints in the past year that the building contained illegally converted apartments. “Inspectors visited the location six times in the last year but were denied access each time,” he said.

City Council leaders including the speaker, Christine C. Quinn, issued a statement on Saturday, saying that the Council planned to hold a hearing in June to explore ways to make it easier for inspectors to get into buildings where illegal conversions were suspected.

Check out the description in the Post....
Posted by Queens Crapper at 12:57 AM

FYI - Christine Quinn held a city council task force meeting on DOB way before the election, did not show up and had James Oddo chair because she did not want to face a room filled with protestors fighting Trump build at Spring and Varrick. I spoke and rocked the house. I talked about Bloomberg's reckless tsunami on old NY's infrastructure and death toll. Even more people died. Little local rags all owned by John Sutter removed articles including in Chelsea Now of the meeting and Quinn not attending. Sutter's editor harassed me and I was able to hand in emails to NYPD and file aggravated harassment. They endorsed Bloomberg Quinn.

city Buildings Department, said that the agency had received three complaints in the past year that the building contained illegally converted apartments. “Inspectors visited the location six times in the last year but were denied access each time,” he said.

Fire Marshall should have special powers to gain access to structures that are occupied that pose or are code breaking or unlawfully occupied in a dangerous situation.

Quinn could,t care less about anything other than Manhattan and her gay constituents. This is natural as her energy is soley oocused on her supporters whom live in Manhattan - not elsewhere. The Mayor and Dept heads must address these issues and must be taken to task to be responsible for lack of building safety controls and enforcement. The Afro-American/Caribbean along with all other groups supporting them to rise up and loudly protest the lack of city response to fire safety and most importantly enforcement.

Where is QCC? (oh I know, protecting the leafy suburban character of NE Queens - this is not their problem)

Where is the preservation community (oh I know, expanding the white rich landmark districts in Manhattan - this is not their problem)

Where are the hipsters?(oh I know, tasting the latest gastronomic delight - this is not their problem)

Where are the politicians? hahahaha

building is owned by an immigrant landlord who does not have to be law abiding and will not be found to serve papers on. good luck collecting for a decent funeral from these bastards.

immigrants make millions on these crappy stinky rooming houses & they act like they are all victimized.

I am sorry that these two people had to die all because of the greed and recklessness of a negligent immigrant property owner.

Previous poster a hack trying to make this a racist website.

The problem is that landlords love immigrants because they think they can take advantage of them.

Betty Rogers of North Carolina was the owner. Doesn't sound like an immigrant.

The tenants names were Barbara Hunter, Willie Bell, Levi Atkinson and Lenora Brooks. Where you get negligent immigrant property owner is beyond me.

Auntie Invasion has her 5 year old read newspaper articles to her because she forgot to go to her ESL class.

Once again, these illegal SRO's are the only source of affordable housing left in the City. All of you seem anti rent stabilization, so where should all of the bus boys, dishwashers, stock boys and other over worked under paid New Yorkers live?

These were vagrants, not busboys. And since most busboys are here illegally, they seek out under-the-radar housing that's cheap so they can send as much money back home as possible while staying undetected. Rent regulations will not change those factors. But thanks for trying to make this about something it's not.