Why we wear poppies today 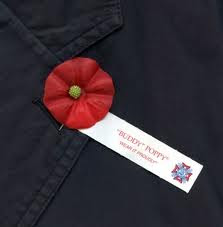 The idea for a Flanders Fields Memorial Poppy came to Miss Moina Michael of Georgia while she was working at the YMCA Overseas War Secretaries' headquarters on a Saturday morning in November 1918, two days before the Armistice was declared at 11 o'clock on 11 November. The Twenty-fifth Conference of the Overseas YMCA War Secretaries was in progress. On passing her desk, a young soldier left a copy of the November Ladies Home Journal on Moina's desk.

At about 10.30am, when everyone was on duty elsewhere, Moina found a few moments to read the magazine. In it she came across a page which carried a vivid color illustration for the poem "We Shall Not Sleep" (later named "In Flanders Fields") by the Canadian Army doctor John McCrae.

Reading the poem on this occasion - she had read it many times before - Moina was transfixed by the last verse - "To you from failing hands we throw the Torch; be yours to hold it high. If ye break faith with us who die, we shall not sleep, though poppies grow in Flanders Fields."

She then conceived of an idea and started the practice of wearing red poppies on Memorial day in honor of those who died serving the nation during war. She was the first to wear one, and sold poppies to her friends and co-workers with the money going to benefit servicemen in need.

The Veterans of Foreign Wars of the United States was the first veteran organization to promote a nationally organized campaign for the annual distribution of poppies assembled by American disabled and needy veterans. In 1924, the VFW patented the name "Buddy Poppy" for their version of the artificial flower.
Posted by Queens Crapper at 12:18 AM

Try and find ONE vendor along the parade route who is actually selling poppies these days and I will give you a hundred bucks.

I've tried for he last 10 years without luck.

That's because vendors just want to sell dirty water hot dogs and tee shirts made in China today and nothing about our culture and history.

Go to the VFW hall and they are selling poppies.

At the many parades and commemorations, ONLY those politicians that have actually served in our armed forces should be allowed to address the veterans.

At today's Whitestone Parade, there were many war veterans - members of VFW, JWV, American Legion - and soldiers, and Queens residents -young and old. They were standing under the hot sun, and had to endure an endless number of speeches by politicians sitting in the shed protected from the sun. Yea, speeches by Bloomberg, the Queens BP, 2 State senators, 3 Assemblymembers, and a councilman. Not one war veteran was asked to speak. After the wreath-laying ceremony and taps, the only pols to join ands march the entire parade route were Bloomberg, Halloran, and Koo. The other pols - Marshall, Stavisky, Avella, Braunstein, Meng, Lancman- made a quick exit right after taps. Comptroller Liu came just before taps.
Yes, only those pols that actually served in our armed forces should be invited - or permitted- to address the assembled veterans and their relatives. The parade is about those that served in the US armed forces, not politicians.

Hey! What about me? I love poppies and other flowers. When I'm not wearin' 'em, I'm snortin' 'em or smokin' em!

Try and find ONE vendor along the parade route who is actually selling poppies these days and I will give you a hundred bucks.
------------------

Several in Glendale. One at the intersection near McDonalds, one in the parking lot of Shop&Stop.

I didn't see any Vets selling their Poppies anywhere. Have they stopped doing this? I always purchase several in their support.

the vet volunteers usually are in front of Waldbaum's Market, a week prior to Memorial Day. F.L.blvd./35th ave.

no charge,just give a donation to their vet. group.