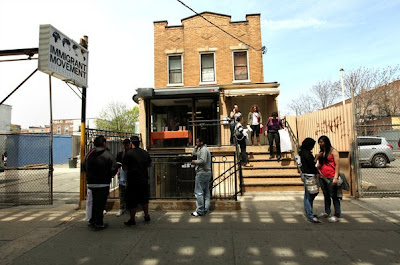 Tania Bruguera has eaten dirt, hung a dead lamb from her neck and served trays of cocaine to a gallery audience, all in the name of art. She has shown her work at the Venice Biennale, been feted at the Pompidou Center in Paris and landed a Guggenheim fellowship.

But now she is sharing a tiny apartment in Corona, Queens, with five illegal immigrants and their six children, including a newborn, while scraping by on the minimum wage, without health insurance.

She has not fallen on hard times. Ms. Bruguera is performing a yearlong art piece meant to improve the image of immigrants and highlight their plight. And she is bringing her high-concept brand of provocation to a low-wattage precinct of taco stands and auto-body shops, where the neighbors have responded with varying degrees of curiosity, amusement and befuddlement.

I was going to just make fun of this, since it's a really stupid "art" project. But then I read this: Ms. Bruguera has turned the space, a former beauty supply store, into the headquarters for her new advocacy group-cum-art project, Immigrant Movement International, using about $85,000 from Creative Time, a nonprofit arts group, and the Queens Museum of Art.

She's getting grants from not-for-profits funded by our tax dollars, even though it says in the article that she's a woman of means who could have funded this experiment herself. How generous of us!

Her roommates, especially an out-of-work Ecuadorean laborer, do not know what to make of her. “I explained to them four times what I’m doing already,” she said. “They don’t get it. They’re not very excited.”

Looks like I have something in common with Ecuadorean day laborers in Corona...
Posted by Queens Crapper at 12:28 AM

Hey, $65 million for the Queens Museum while the arts (as opposed to marginal talent Tweeder programs) rot in the borough.

Welcome to Queens - where political agendas determine priorities - and everything is second rate because of it.... and the culprits are sent back to office for their troubles by their groveling constituents.

Can you remember the last time someone you know said: hey, lets go to the Queens Museum - it looks like they have a great exhibit ....

In plain English, its a tweeder program.

Notice how Queens has tons of money for shit like this, but not a dime for something real, like the Steinway Mansion or Bowne House or St Saviours whose future is nothing but rot and decay?

We're getting butt f----d worse than these immigrants are because its mostly our middle class tax dollars that is paying for this "artiste's" ego centric publicity stunt.

Let's face it folks,
the middle class is the cheese stuck in the middle of a nasty sandwich.

We don't have quite enough money to be considered wealthy....
but we've got just enough to be denied access to the assistance programs that the poorer classes reap.

Actually, both the rich and the poor of NYC benefit from us middle classers.

We're supporting the whole damned city but getting it from both ends!

Now if anyone thinks my views are politically incorrect....you can go f--k yourselves....sans "KY" jelly!

Nobody goes to the Queens Museum unless they bus in school tripsters or elder tours.

It's a 3rd rate institution featuring mediocre art and assorted cast offs from other museums.

LOL...
another example of an "artistic" con job being foisted upon NYC taxpayers!

Some huckster is pulling our tax money out of the municipal coffers while NYC is closing schools and firehouses.

Hey....
but the great Democratic machine of Queens has to pander to these immigrants so they can continue importing their needed votes from abroad.

This is classic "Tweeding" in full view!

served trays of cocaine to a gallery audience.......

WHERE WAS I WHEN THIS WAS GOING ON?

I have my razor and 7 eleven slurpee (the giant red one) straw READY!!!

Such a Wondrous project that brings new light to our fair tolerant city!!!!!. The Ecuadorean Immigrant though not ecstatic will bring great contributions with his attitude. All the above posters have only two options. 1) Accept and embrace this vibrant diversity ad fund it. or 2) You are a racist, bigot, xenophobe, regressive.

the illegal immigrants don't want the publicity. will be interesting to see how this plays out.

"served trays of cocaine to a gallery audience.......

WHERE WAS I WHEN THIS WAS GOING ON?

I have my razor and 7 eleven slurpee (the giant red one) straw READY!!!"

A giant red 7 eleven slurpee straw is too pedestrian for a Queens Museum soiree. One uses a rolled up $100 bill, you silly wretch!

Art is when these poor day laborers have enough to eat and a stable shelter - this is not art, this is a mockery of their way of life.