This is one of Queens' "business experts"... 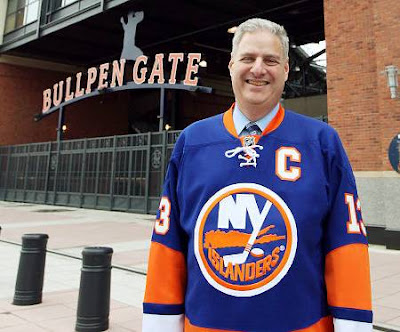 Jack Friedman, executive VP of the Queens Chamber of Commerce, tells GlobeSt.com that the [living wage] measure would all but kill development, which has already been hit hard in the region. “I can’t imagine Willets Point going forward if the living wage mandate goes forward,” Friedman says. “Because what retailer in their right mind is going to agree to sign leases in a place where they’re going to have to pay their employees 50% more than the people down the block?”

This business genius apparently has forgotten that "living wages" were mandated for the Willets Point project, which he relentlessly cheered for. So with this incredible statement, he's basically admitting that "NYC's next great neighborhood" will never happen.

Photo from the Daily News
Posted by Queens Crapper at 12:41 AM

These Illegal Land-grabbers seem determined to build a Ghost Town in Willets Point.

I grew up with his kids so I've known him for years... he's a schmuck.

That Willets Point boondoggle will be buried along with Shulman.

And we guess that Wellington Zhou Chen will have to go back to Taiwan or the People's ROC to face the music.

Maybe "Flushing Commons" will bite the dust too.

Time to take a slow boat back to Shanghai....Michel Meyers.

And an Islanders fan to boot.

You'll have live octopus like everyone else at this table!!!

Friedman is an asshole.

does any parent recall if he was an assh-le while president of Community School Board 26 ?