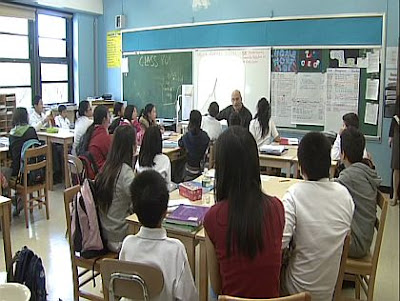 Parents of children in school districts 24 and 30 in Queens say problems with overcrowding have gone too far.

The organization Make the Road New York says the public schools in those neighborhoods of northwest Queens are so bad, the first lunch period is at 9:30am.

Make the Road New York says more than half of the students in that area of the city attend an overcrowded school. Specialty classes like art, music and gym are canceled so those rooms can be used as regular classrooms.

City councilman Daniel Dromm was a teacher in District 24 for 25 years. He said the overcrowding problem has only gotten worse. “We’re looking at locker rooms being used as classrooms,” he said.

Councilwoman Julissa Ferreras attended PS 19 in Corona, one of the most severely overcrowded schools in those districts. Back then, the school was so crowded, her academic classes were held in the gym.

She’s now 34-years-old and says nothing has changed. That’s why she’s joined the fight to end overcrowding.

And how do we do that, boys and girls? STOP ILLEGAL IMMIGRATION. But you don't want to do that...

As immigrant families have flooded into Corona in recent years, their children have poured into the neighborhood’s schools. Crowding has been an issue for at least two decades, but it has become especially severe since 2005; in District 24, which encompasses Corona and six other neighborhoods in western Queens, student enrollment has gone up 12 percent in that time, while citywide, it has remained flat.

Meanwhile, many schools have too many vacancies...
Posted by Queens Crapper at 12:26 AM

If the classroom depicted is representative of the Corona Classrooms, that's NOT overcrowded. When will NYC stop being held hostage by the UFT's use of children as bargaining chips? Make no mistake that's exactly what Mulgrew and his "Union" do.

Anonymous #1 is correct. That classroom is NOT crowded. The school might have even dispensed with the schoolyard AND recess where the children can blow off a little steam.

Sorry but we're broke. What's next? We definitely can't afford individual tutors for every child in the system of this ridiculous "sanctuary city".

"Make the Road"? What "road"? Are those people here illegally???

"Daniel Dromm" was a teacher??? That's hard to even imagine. He usually appears to be under the influence of something which has yet to be defined. Just an opinion

STOP ILLEGAL IMMIGRATION, stop giving away funds we don't have to educate illegals from all over the world who come here for the free education, hospital care, welfare and tax free pay!

I have classrom pictures from when my mom was in school back in the 1950's.

There were 65 students per class.

No computers.
No disruptions.
No talk of "overcrowded".
1 blackboard.
1 nun.

A lot of the kids back then were first generation Italian, Irish and German.

A lot of the kids back then were first generation Italian, Irish and German.

Italian/Irish/German were from civilized Europe.

The news waves are coming from places that don't even have running water half the time. They just don't know how to be human.

Years ago, when there was LEGAL IMMIGRATION, people from Europe worked, learned English and embraced the United States and its laws. People lived modestly and were too PROUD to accept welfare or charity. The taught their children that America was the land of opportunity and if they wanted to succeed they had to do well in school and get a good job and work. There was no bilingual education. English was learned. Now, we live in the land of entitlement. People who come here want the almighty dollar. They have no allegiance to this country and no regard for our laws. Most come here illegally and want what they are entitled to. They want a free education, free housing, free food stamps and free healthcare. They want taxpayers to pay for all of this, but won't learn our language or follow our rules. Middle class people pay for private school for their kids because public schools are overcrowded and overrun by all the illegals sucking off the taxpayers. Where are our politicians in all of this? Why, they are pandering to all the illegals and welcoming them with open arms. It's the rule of politics to keep your constituents dumb and tweeded. Keep the entitlements coming and they will keep coming. No one will ever complain, except the taxpayers, who are leaving the state in droves.

Can't say it better or more honestly than Anonymous 4. *applause*

Bloomberg wants all the illegals to come to NYC. Therefore, he should donate a billion dollars to run city public schools. There would be no more education budget problems because he could manage the schools like his business. Since he invited all these illegals here, he should be responsible to educate them.

Bloomberg should also donate money to the Fire Department. With so many illegal aliens crammed into Queens, he should be opening fire houses, not closing them. Wait until there's a big fire or God forbid, a terrorist attack. Who will put out those fires?

What does it matter?

These are "no count" Latino kids...
so Bloomberg won't be losing any sleep over this.

If this were going on in Mayor Mike's hood...he'd be raising hell.

Moreover the well off parents in his hood would be kicking Mike's butt to improve conditions.

These new immigrants will grow up to be voting just fodder for the
Queens Democratic machine.

Before it was all privatized by contracting out to connected contractors,I used to do "per session" evaluations for the Queens DOE region to determine whether kids needed special ed related dervices or not.(cont'd)

We had parents who literally came straight from JFK,bags and kids in tow to make sure those kids, who'd just come from Central America, Pakistan or Nigeria got tested for those services they'd heard about back home.

Kennedys "Immigration Act of 1965"
It let the worlds garbage into the country.
Its now happening again with even WORSE feral people that breed like cockroaches and are in horrible health.
They are going to bankrupt the country. Make no mistake the Chinese will then buy everything and make everybody slaves

Big waste of money for this babysitting service. The city should make a 4 day week.
You cant educate children of illegals. They live feral with no fathers, discipline or supervision in the household. The mothers they do have outright REFUSE to speak English in the household and feed them garbage.
I was in the Ridgewood library must have been 150 of them playing games on computers and watching a movie in Spanish
5 feet tall and 160 pounds most these Mex & Central American kids (especially the girls) are are badly overweight and are going to end up with diabetes and clogged artery's we are gonna pay for

Anybody know what up with that, Is it genetic ?

next open school night they should hand out condoms to the parents.

You people are all morons!

next open school night they should hand out condoms to the parents.

Bob Grant was right !
We have become a third world country.

yet alone wear a glove, it doesn't feel as good!

Oh yeah? Ever try a mitten?