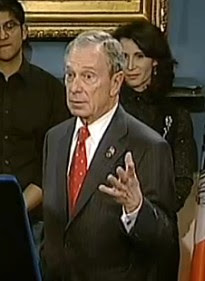 Mayor Bloomberg raised eyebrows with a remark Monday that "there aren't very many panhandlers left" in city subways.

Bloomberg, a billionaire who rides the subway accompanied by his security detail, made the remark during a news conference at City Hall about another matter.

A person asking about cell phone service in the subways mentioned panhandlers, and Bloomberg, appearing irritated, interrupted the question.

"There aren't very many panhandlers left, in all fairness to the MTA, come on," he said.

Bloomberg added that the MTA has "worked very hard to fix that."

Advocates for the homeless and hungry said panhandlers are common in the subways, and said Bloomberg is living in another world.

Joel Berg, head of the New York City Coalition Against Hunger, called the remark "absurd" and said it "bears no relation to reality."
Posted by Queens Crapper at 1:10 AM

compared to 20 years ago, he is right, but there definitely has been an uptick in the past few years

I am sick of no talent bang the garbage cans - give me money folks. There are too many folks with their hands out. Bloomberg the clueless.

I saw on a guy on the A train doing magic tricks and asked for donations (panhandling).

Those young teens who put on their radios and do those crazy dances are interesting and somewhat make my day a little more enjoyable.

These people shouldn't be sought out so diligently. They should but those real hardcore bums who don't perform or do any service (if you could call it that) should be priority number one.

LOL 6 course meals or a $2 blessing from Rev.Buggs (the reformed Ridgewood crack addict from Rikers on the L&M trains are nothing get a load of this :

Those crazy hippies were serving and eating deep fried catfish, fried pickles & boiled red water bugs (complete with the eyeballs, legs & antennas) on Flushing ave off a step van.
---Biting the heads off, sucking the brains and guts then washing it down with lemons & Mountain Dew.
I almost got sick and threw up all over the dam street. I could not eat anything till the next day.

What is wrong with these people have they gone crazy from smoking to much pot ??

The panhandlers are in Albany, representing us in the Assembly and the Senate. Their begging is in front of lobbyists.

I see nothing! Nothing!

While waiting for the E train last night, my wife and I encountered a rather aggressive (and persistent) one at the 50 Street stop in Manhattan.

Anonymous # 7-- This is very common. Pan handlers like to hop on E, F, M trains right before they head into Queens. Just our luck!

Pan handlers like to hop on E, F, M trains right before they head into Queens. Just our luck!

How else will I get home?

I wish I had the guts to take a picture of an ugly 40-ish woman sitting behind that familiar crude cardboard sign "Homeless. Please Help." and chatting away on her cell phone.

The crazy teens jumping around in the subway cars to hip hop music are usually within millimeters of kicking someones teeth in or breaking their or someone else's neck. They need to be stopped.

Bloomberg is a asshole moron who is so out of touch with the city he supposedly governs it would be funny if it weren't true.

Mayor Mike is right. There are NO PANHANDLERS. He's never seen one in his limosine.

It's nice to be able to purchase the reality you'd like to believe in,like no panhandlers,lower crime,perpetually rising profits and test scores and limitless terms of officezisn't it?

It's easy to govern with your eyes closed!

In Bloomberg's world there are no beggars..His kids went to private school, they take equestrian lessons, they dont play handball in a concrete park... - he takes the train to work with a security detail.. any beggar who sees this is going to walk the other way. He is in a bubble because of his money. He dontate money but to charites that benefit the wealthy like museums, art perservation and the like. He isnt donating to soup kitchens or local schools that need knew libraries.

The best panhandling scam is a pregnant muslim (head scarf) woman with a 10 year old boy who both lie completely down on a cardboard and hold a sign up directed at passing commuter on the way to the 7 train in grand Central:
I am homeless & 7 months pregnant please give me money so that my son can eat.

Yeah,Mike,
We all wish we could purchase our own reality like you!Best test results money can buy,same with the crime stats, and if there's a blizzard, hey, if ya can't jet off to Bermuda, at least take in a Broadway show. In Mikey's reality, beggars are down (security details tend to discourage the practice). As for the rest of us, however....