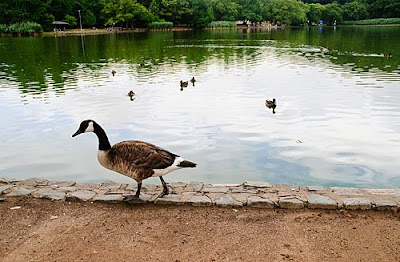 Goose census takers are finishing up the federal government’s official count of waterfowl in Brooklyn — but the would-be bird exterminators aren’t likely to fire up their gas chambers again this year because the population of local geese has already plummeted.

This week, only 23 geese were spotted in Prospect Park — where more than 300 Canada geese were slaughtered by the federal government in the name of aviation security last July.

The decreased population is a result of a multi-faceted and non-lethal approach to animal control after the outcry over last year’s massacre. Park biologists have covered eggs in corn oil to prevent their development, brought in dogs to chase geese away, and enforced a strict “no feeding” policy.

As a result, Park officials say that no goslings have been born this season, and many geese have moved on.
BoroDeal

Of course, the goose population was greatly reduced by the slaughter itself.

Violent measures may not be needed this year because of the success of humane efforts to keep the goose population down. In the passed two months, biologists have combed nearly every inch of Prospect Park, tracking mated pairs of geese back to their nests, where the eggs have been coated with corn oil to suffocate the embryos before development. This prevents goslings from hatching in the weeks before the season in which officials can legally exterminate them.

Along with this “egg addling” technique, the Park has hiring a company called “Goose Busters,” which uses border collies to scare away the squawkers.

So what does this tell us?

1) The geese in our local parks don't go anywhere. They eat and reproduce in the parks. They aren't circling over JFK or flying to heights that would strike aircraft.
2) We are wasting a lot of money rounding up these geese for slaughter since migratory geese and other species of birds are mainly responsible for air strikes.
3) We can humanely control the population of geese.
Posted by Queens Crapper at 12:33 AM

Geese abortion!!! Wait till this out. Let's kill them before they're born. Do you think this will work for humans?