Symbolic of the decline of Woodside 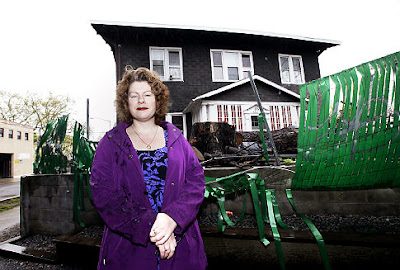 Trash is piling high at a 19th-century Woodside hotel that neighbors say has descended from community gem to eyesore.

The 39th Ave. home, once known as Meyer's Hotel, has tree stumps, a discarded door and construction materials on its front lawn. Graffiti also mars its chain-link fence.

City Councilman Jimmy Van Bramer (D-Sunnyside) called the mess at the former inn, which welcomed lodgers from 1882 to 1917, "at a minimum unattractive and possibly unhealthy."

Locals fear the house itself, whose columns appear to be crumbling, will fall into irreparable disrepair.

"History seems to be disappearing before my eyes," said Kristen Cullen, 39, of Sunnyside. "It looks like a dump."

Van Bramer alerted the city Health Department, which said it will inspect the property.

"We'd want it to be preserved and repaired," Van Bramer said.

So much trash is stacked in the yard that a path to the front door was impassable on a recent afternoon. No one answered the side door.

Nearby residents said the decay of the once-elegant house is symbolic of Woodside's decline.

Hard to believe western Queens was once full of wealthy Manhattanites' country homes, farmhouses and Victorian mansions considering what has happened to it as of late.
Posted by Queens Crapper at 12:30 AM

And what's happening on the Steinway Mansion front?

Jimmy is very selective in his landmark credentials.

Jimmy accepted the fact that the 350 year old Dutch Kills millstones are 'decorative sidewalks' not worth of landmarks protection.

If Van Bramer cared about Landmarking he would do something in Sunnyside Gardens where the community is still bitterly divided not only because the pols did their special magic but the LPC seems to be doing everything they need to do to maximize the community's angst.

The general lack of regard for our borough's historical sites and irreplaceable architecture can be traced directly to the doorstep of Queens Borough Hall.

Claire Shulman was his relief driver.

Now we have Dr. Jack Eichenbaum, serving as our current official borough historian.

Dr. Eichenbaum has gone on record for not particularly favoring landmarking as a prime tool for preserving history.

He believes more in education versus municipal designation.

By the time that some of our thick headed politicians become properly educated, there won't be much left.

Thank you Dr. Eichenbaum for what you're not doing.

Hey, Eichenbaum charges $15 to take one of his "tours". I wonder if he gets paid in cash and does he give a receipt to the participants?

But isn't Eichenbaum exactly what Helen Marshal ordered.....
a boring tour guide who won't rub any developer the wrong way by speaking up for historic preservation.

Look at the other four borough's historians.

They've got the real goods.

And what has Queens got?