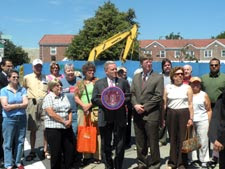 After almost one year since funds were obtained for its purchase, a parcel of land in Woodside dubbed ‘Triangle Park’ is not likely to become city property any time soon, according to the city Parks Department.

A spokeswoman for the department said on Tuesday that the city had abandoned negotiations with property owner Vinny Oppedisano after they were unable to agree on a price for the island located at the intersection of 59th and 60th streets and 34th Avenue.

Residents in the area had used the vacant land as a park until Oppedisano began construction on it.

In July, Councilman Jimmy Van Bramer (D-Sunnyside) secured $350,000, which he said was going to be used to purchase the 1,265-square-foot site. But the land was appraised by the city at $140,000, which was the amount offered to the property owner, Van Bramer said. The owner refused to accept the bid, and despite ongoing negotiations, no agreement was reached.

Van Bramer said a foundation has been built on the land. “At the end of the day this is private property,” he noted.

No, the correct thing to say is, "At the end of the day, there's always condemnation as this is for a public use."
Posted by Queens Crapper at 12:18 AM

The mayor just does not care about Queens. He gave us Elmhurst Park, and hat's it. Nevermind St. Savior's and Woodside Triangle.

I walked by an existing park at 39th Av and 50th St thats going to be destroyed by a developer in the near future. Why isn't somebody talking about this. Figure that it's a park already why lose it.

City Council does not care about Queens. They gave us $65 million for Queens Museum and thats it. Never mind Bowne House or St Saviours, or ....