If this were Manhattan instead of Rockaway... 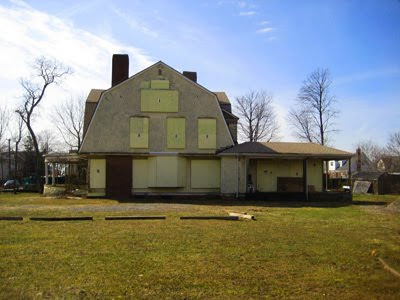 At the end of the peninsula, where Mott Avenue dead-ends, is Bayswater Point State Park. The closest subway stop (Mott Avenue-Far Rockaway at the end of the A) is a little more than a mile away, so not a lot of people go there. It is also the only state park in the New York City region that does not have full-time, year-round staff attached to it.

In theory, it is a lovely spot. It affords access to recreational fishing and is a seasonal home for a significant variety of birds; the state park web site recommends it for “passive recreation.” It covers 12 acres, unless you count the tidal bed, in which case it is 14 acres.

What a visitor actually sees, these days, is the wreck of what was once a very nice estate.

Closed off behind a chain-link fence, across the street from a row of working homes in varying states of repair, is an enormous house that has clearly not been lived in for a long time. On either side of what looks like it was once the driveway are two brick pillars, one of which has a small cement plaque with the words “Sunset Lodge” carved into it. There’s a spacious yard to the right of the house, whose windows are covered by thick plywood, although they have been painted roughly the same pale-yellow color as the house.

Behind the big house, down where the woods start, is a smaller house that the vines have nearly brought down. This is the other side of Bayswater Point State Park, which is almost entirely inaccessible, and technically out of bounds anyway. (Visitors are not supposed to jump the fence, approach the house, or try to navigate the woods behind it. If one were to do that, one would find a network of trees struck together by thorny ropes of creepers.)

On page 3, the long time residents - African-American and Jewish folks (not "Archie Bunkers" by any stretch of the imagination) - describe how Rockaway went from paradise to dump thanks to the social engineering experiments by the City and State of New York. For those of you who think cranky old white conservatives are the only ones lamenting what the tweeders have done to this borough - guess what? They're not!
Posted by Queens Crapper at 12:56 AM

Anyone who has been a long time home owner laments the tactics or lack of, that City of NY has taken over the decades at the expense of all home owners.

This not about any ethnic group - yes there has been segregation by ethnic race in the past, but never the less - homeowners are bound together and affected by the policies of some absolutely detrimental decisions made by past Manhattan liberals for outer bougoughs that devastated entire areas.

If by "social engineering experiments" you mean NYCHA projects, you can hardly cite Queens as being lone victim here. Manhattan has tons of NYCHA and other versions of Public Housing.

I have gone to Rockaway Park at Beach 116th st since I was three in 1959. Yes, it did seem odd that the other end of that peninsula had projects right on what seems to me to be desirable ocean front property... The thinking here seemed to have been a sort of quarantining of the "problem" into an area that does not have good mass transit to the City (or anywhere else).

Its not limited to just Far Rockaway, look at Rock-Park -an area with sort of adequate mass transit. Redevelopment has stalled there for decades. Example: When the Atlas Hotel/Curley's Bathhouse was burned down in Feb 1968, that lot stood empty for 40 years.

The only explanation i can think of here is that it is somewhat remote from Manhattan and frankly, there is little shopping and the winters are brutal.

Alot of the present day situation out there is not social engineering -its market forces. Things are, or were beginning to move till the recession.

If you actually read the article, you would know what I was referring to as social engineering.

To its Council member, James Sanders, the area has become New York City's “ground zero” of the damage done by the subprime mortgage crisis. The local high school is closing because of bad academic performance and low graduations rates, even as the area continues to be the city's preferred location for senior centers, drug treatment centers, and group homes.

Q-C I did read the article, plowed through three pages about some eccentric couple in their dumpy house filled with old newspapers before we got to the meat of the matter.

Here's where your argument wears thin: Go just a mile or so west to Beach 116th st. NO NYCHA projects atleast one bus line and the Rock-Park shuttle (aka E and formerly HH)

Until just recently the area was known for SRO hotels with drunken old Irish men and a strip of bars and cheap stores along 116th with a struggling diner at the other end. A LOT of empty storefronts too. Those hotels are privately owned and could have been redeveloped at any time ...had their been a market.

Again, NO "projects" NO "social engineering" just an area that fell out of favor, due in part to it's relative isolation and tough winters.

"Until just recently the area was known for SRO hotels with drunken old Irish men and a strip of bars and cheap stores along 116th with a struggling diner at the other end. A LOT of empty storefronts too. Those hotels are privately owned and could have been redeveloped at any time ...had their been a market."

Thanks for proving my point instead of rebutting it. If there are junkies and drunks living in section 8 flophouses, who the hell would want to invest in a hotel? Who would want to stay in a hotel there?

City Island is relatively isolated and has rough winters too. But the city never decided to dump on it and it looks fine. Nor did they dump on lovely Belle Harbor, also in Rockaway and also isolated with rough winters. Your "market forces" analysis doesn't hold water.

"Thanks for proving my point instead of rebutting it. If there are junkies and drunks living in section 8 flophouses, who the hell would want to invest in a hotel? Who would want to stay in a hotel there?"

The point Q-C is not that someone would invest in any of those dumps -no one in their right mind would want to stay there. If the area were less isolated and distant from Manhattan (the borough you love to hate) those old dumps would have been redeveloped 40-50 years ago.

I will agree that putting those huge housing projects in Far Rockaway was a mistake given who was now taking them over.

It was also self-defeating of any hope of getting those residents to even look for work in an area so isolated and distant from likely employment.

See anonymous before you. I agree with that commenter. Distance from Manhattan is not an issue when the train pulls right into the area. There are hotels in more remote locations than Rockaway. Rockaway was once and could have remained a self-contained type of community. But the government had to interfere. That's what ruined it.

They did the same thing to Coney Island, now we are paying billions to rehabilitate it and make it desirable again.

"Oh, there once was a man from far Rockaway...

Speaking of whores....
if we had a borough president who wasn't so busy servicing developers, we wouldn't be witnessing this kind of mess.

The area where this Bayswater park is has as much to do with Rockaway park as does Ireland have to do with Yemen .The area looks more like its neighboor Village of Lawrence than the distant Rockaway park.The homes & property in the area are huge & demographically it shares the same shopping ,religious institutions & education as its next door Nassau county.As far as Arverne it now is experiencing an influx of artists from Manhattan & families from Nassau county that do not want to save on tax abatements.Hopefully they will build art galleries ,cafes ,& tear down those hideous projects & send them to Bloombergs manhattan .We do not need section 8 on oceanfront property ,but upscale housing as in its next door Atlantic Beach & Lawrence.