Landmarking a church can really pay off 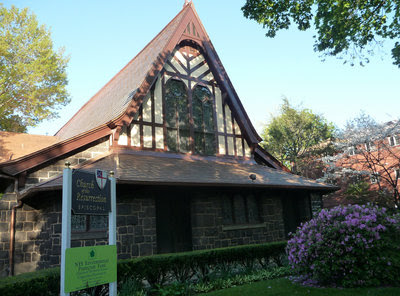 From the Forest Hills Times:

The Church of the Resurrection in Kew Gardens has a lot to celebrate. The 137-year-old structure is seeing a revamp in its image since its 100-year-old copper tile roof has been replaced.

The roof on the landmarked church will be replaced with the same material and enable the preservation of the historic structure for another 137-plus years.

In the last 16 years, the roof has been deteriorating. The wind would blow off loose copper shingles and church members often had to rest buckets at various parts of the church to catch dripping rainwater. “In the last few years it was becoming worse,” Hinds said.

The church was able to replace the roof thanks to a $10,000 grant from the New York Landmarks Conservancy, which was given to the church because it is both a state and federal historic site. A $250,000 matching grant was also awarded to the church by the New York State Office of Parks, Recreation and Historic Preservation.

I thought landmarking churches caused the congregations to go bankrupt because they can't afford the upkeep on the buildings. You mean landmarking them actually opens doors to money they wouldn't have had access to in the first place and all that we've been told by the tweeders isn't true?
Posted by Queens Crapper at 12:33 AM

Too bad Bloomberg and his lackeys didn't see it that way for the historic St. Saviour's Church in Maspeth.

Now his "parkies" at the NYC Parks Department are doing the slow-poke shuffle in creating a city park on that site.

I thought you believed in a green New York Mayor Mike.

What the hell is a tweeder? Who uses that term?

and all they had to do to get it was deal with rain falling on their heads during mass...

The bigger question: When these old dumps are landmarked, what happens when the existing audience moves away and there aren't enough of the "faithful" left to sustain it.

Do the religion operators have responsibility..or do we taxpayers get stuck maintaining a building that can't (easily) be altered or demolished?

You don't seem to understand - the grants are paid for by taxpayers. They are getting tax-free money to fix their house of worship. When there aren't enough parishioners left, it can be sold and repurposed for a community use as thousands of other churches have across the country. Take a look at the First Reformed Dutch Church or Chapel of the 3 Sisters in Jamaica.

What the hell is a tweeder? Who uses that term?

Ever hear of Google, troll?

"Queens Crapper said...
You don't seem to understand - the grants are paid for by taxpayers. "

The building is landmarked and thus can not be easily altered and, at that age, it will likely require repeated grants to maintain regardless of who or what takes over....All the while it'll probably remain tax exempt.

Oh well, it's really just a drip...or drop in the bucket for this City.

I'd rather see tax money go toward repeated grants to save something of historical or architectural value than to a boondoggle like Willets Point.

The main point of your article is well taken, and definitely sustained by your evidence. Indeed, we are told so many lies by those in power. Only the press keeps us free. That's you. Thx.

I am greatful for those grants be given to Church of the Resurrection. The parishioners are wonderful people who let our group use their Church basement. It is appreciated. It's a beautiful church inside and out filled with a lot of Spirit!

This signifies the benefits of using landmarking as a means of commemoration and prestige, and acquiring funding for restoration and historically-sensitive upgrades. If the use of the building changes, it can be adaptively and creatively reused by preserving its historic architecture. If you have a property and would like advice on landmarking and its potential for funding programs, please email unlockthevault@hotmail.com Rego-Forest Preservation Council would be happy to consult you.

I'm sure that "old dump" St. Paul's cathedral in London has lost most of its original congregants since Christopher Wren first built it.

It remains its nation's pride.

Now, new worshipers, hailing from many nations, attend services there.

If we continue to let avaricious developers put Queens' history out at the curb for garbage collection, we will have nothing left to be proud of.

We have little as it is.

Greedy real estate speculators (many whom are foreign based) are turning our borough into an assorted collection of barracks and glitz boxes.

Following their line of reasoning,
I think we should demolish the White House, US Capitol Building and all of our costly to maintain leaking roof "dumps".

Does America really need these relics when we could build condos on all of that land?

There would national be outrage if this would come to pass!

But it's OK to piss all over Queens venerated sites.

We're just a boil on Bloomberg's rump that needs to be lanced and drained.

"We're poor as a church mouse".

That Korean church that owned St. Saviour's just wanted to cash out and rake in the green!

Stop dramatizing with that leaky roof scenario crap of yours.

If it were so...TROLL...a simple call to a roofer would have put an end to it.

The 17th century
Old Quaker Meeting House
in Flushing has relatively few members and is hardly
rolling in cash.

Yet, as good stewards,
they manage to maintain
this most important structure (despite any hardships) so that the community can continue to benefit
from its use
for generations to come.

It wasn't easy but it was certainly worth all their trouble.

Some grants were obtained by them through the "Sacred Sites Program" offered by the New York City Landmarks Conservancy, which is a private funding group.

The Old Quaker Meeting House,
along with its grounds, represents one of Flushing's most
important focal points throughout it's long history.

The town of Maspeth is NO LESS important than Flushing.

It might be the location of one of the FIRST settlements in our borough.

Maspeth, most certainly, DID NOT deserve to lose St. Saviour's Church---one of ITS most important sites.

It's time for the Bloomberg administration to pull out all the stops and create that badly needed park on the former site of St. Saviour's Church.

It's past the time for our park's commissioner to stop waffling and get on with it, without any further delay!

It's my understanding that they voluntarily offer some payment in lieu of taxes in return for the services they receive from the city.

DO you know what it ends up costing you in terms of restoration?

"Following their line of reasoning,
I think we should demolish the White House, US Capitol Building and all of our costly to maintain leaking roof "dumps"."

These are all public buildings. I don't want my tax $ to be used to preserve a private church, no matter how pretty some believe it is.

Tough shit, the laws of this country say otherwise with respect to grant money. You lose.

Sounds like "doofy" Dan Halloran, or one of his Libertarian jerk wads is posting.

Those Libertarians of his are practically anarchists.

Enjoy your remaining term councilman.
You're not getting re-elected.

You're right on the money,
"Queens Crapper"!

A lesson in case law:

And that certainly confirms the law of the land---with regards to the granting of landmark status and the maintenance of such sites.