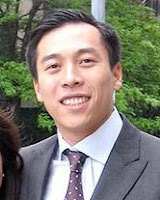 Jukay Hsu, 26, grew up in Flushing and Bayside and graduated from the elite Stuyvesant High School in Manhattan ﻿graduating from Harvard University with a degree in economics then, in a rare move for an Ivy League graduate, joining the U.S. Army.

And now he hopes to help facilitate the inclusion of a campus of a top-tier university such as Stanford or Cornell in Mayor Michael Bloomberg’s $3 billion plan for the redevelopment of Willets Point.

And it appears he is convincing others to follow his lead. He has met with and received encouragement from supporters of the Willets Point redevelopment plan including City Councilman Peter Koo (R-Flushing) and former Borough President Claire Shulman.

Shulman and Koo should have explained to the eager young man that a university was not part of the scenario for the Willets Point plan that was approved by the City Council in 2008. So it ain't gonna happen unless there is another vote, which ain't gonna happen.

Also interesting is that no one seems to have any idea exactly what will actually be built there and on how much land. First we were told the entire triangle must be leveled and remediated at once, otherwise there would be underground cross-contamination. Then we were told to forget what we were told, that it can proceed in phases. The first phase would be 20 acres. But then we were told that 8 of those acres would constitute a "buffer zone". Now we are down to 12 acres, which just happen to sit across the street from CitiField. In the meantime, soccer teams are salivating over the thought of a stadium at Willets Point, the Islanders flirted with the idea of coming to no man's land and now this latest bright idea.

Get ready for New London all over again.
Posted by Queens Crapper at 12:45 AM

is he related to the convicted democratic "BUNDLER" of the 2008 national election ,which also saw money go to local n.y.c. democrat candidates ?

I saw him speak at a club, he was very convincing. It would be nice to have something other than a boutique hotel. Even if it's just a street dream...

I had a friend scream up and say, "Well, that hotel building will bring jobs, won't it?!"

Yea pal, it will. But somehow I doubt master mechanics, glass technicians, and iron workers have the makings of a great bellboy.

I had another friend scream up and say, "Well, the government will relocate the businesses, won't they!?"

Yea pal, they will. But somehow I doubt local business owners, who's clientele are local will want to take their busted ass cars up to the Bronx and pay 13 dollars in friggin' tolls.

What kind of a City Planner are you?

"Granny" Shulman and "cuckoo" Koo are listening to this young man only because he's Asian.

Nobody wants to offend any Asians.

There won't be any "university".

They're merely walking him down the garden path...apearing to be listening politely and offering a sympatheic ear...then plan to kick him in the ass in the end.

Remember the "Touro College" campus in Flushing? That was a flop.

"Granny" Shulman and "cuckoo" Koo are listening to this young man only because he's Asian.

Absolutely true, if this was a spanish or black guy koo wouldn't have even given him the time of day.

Yeah right, Harvard next to Flushing toilet bay - all these bright minds sick to their stomachs smelling all that aroma. Then they have the Madoff cronies next door : the owners of the Mets = stinkers too!

Just auction Willets Point on EBAY and let the marketplace determine its value.

Mr. Hsu needs to be more realistic with his ideas. I can see if he wants to become a community activist. But, he needs to choose another path. We already have unsuccessful for-profit universities in Queens, Touro College. What makes this plan different from the rest?

I think that it will be different because Touro is not coming, Stanford, Columbia, Cornell, Carnegie-Mellon, NYU, these universities are the ones we're talking about here.