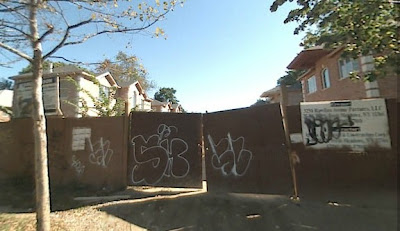 The developer of the Teddy Place luxury homes at 3250 Rawlins Avenue, after losing an appeal, was forced to raze two of five houses, so that he could proceed with marketing the remaining three Country Club properties formerly occupied by a decrepit old mansion. The demolition of 3 and 4 Teddy Place was completed on Tuesday, May 10.

The project’s architect and developer originally filed a self-certification application with the Department of Buildings to build the houses in a cluster format around a private street named Teddy Place, and to have the development treated as one house. Upon DOB review, an egregious mistake was discovered.

The homes were both too close to one another and set too far back from the street to meet Country’s Club’s R-2 zoning regulations.

The project’s owner, listed as 3250 Rawlins Avenue Partners, was left with no choice but to level 40 percent of his original investment.

“I think what we had here was someone who didn’t understand the local zoning and who took a chance and got stuck,” said Councilman Jimmy Vacca. “Our neighborhood has worked very hard to stop the kind of over development that we had here, and I hope this sends a message that no one should try to skirt our local zoning. Most importantly, hopefully soon the residents of Rawlins Avenue will no longer have to look at a construction site every day and we can now see this project move.”

From a zoning expert:

"And why hasn't Caliendo lost his architect's seal and ability to file? Vacca's statement about the developer 'not knowing the zoning laws and taking a chance' is pretty ridiculous. Caliendo knew exactly what he was doing."

You'd think this sort of malfeasance would get one kicked off a community board, but in Queens, this is exactly the type of person the borough president appoints again and again. Caliendo has been on CB1 for more than 30 years.
Posted by Queens Crapper at 12:54 AM

“Our neighborhood has worked very hard to stop the kind of over development that we had here, and I hope this sends a message that no one should try to skirt our local zoning."

Yes, this is what they said in Astoria when it was 'saved' by Caliendo, Peter n 'tha boys'.

CB1 - the community board from hell.

What is in their backyard today will be in yours tomorrow.

The project's architect: How can Caliendo sit on CB 1 when his home is in Fresh Meadows and his office is in Kew Gardens?

What a joke. That works about as well as self-regulation of the mortgage derivatives.

For all those crying out the conservative line of "less government" and "less regulation" -This is what happens.

Capitalism only works with adult supervision.

Finally Mr. Caliendo got a Big time, while he always can get away in Wueens with his cinnections.

All the above projects in Queens are exactly similar as the project in the Bronx. With the help form his inside friends in the DOB, they never got audited as required. It's time for DOI to step in....

How come Tommy Huang's buildings in Bayside can avoid being demolished? These buildings seem to have similar layout as those in the Bronx.

I am sure the architect charged with very high fee than normal for submitting fraudulent plans.

Caliendo has gotten away with everything in Queens due to the influence of the Vallones. He gets his printing of plans at Follow the Buck Chuck Apelians printing business in Astoria. Thats if he wants his projects approved. So he ventured into Da Bronx because of the help Paulie recieved from the Bronx Democratic party when the Queens Dems backed Iannecce. I guess he figured he had an in.... GUESS NOT....FYI.....Paulie boy LOST!!!