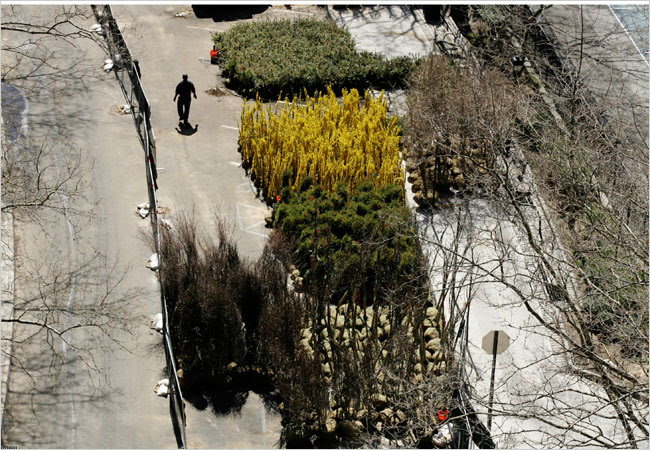 Ten thousand more trees will soon be growing in Manhattan. Give or take one or two.

New trees, shrubs and flowers are giving Stuyvesant Town and Peter Cooper Village an ambience that is almost suburban.

Their roots will settle in the grounds of Stuyvesant Town and Peter Cooper Village, the sprawling complexes that stretch for almost 10 blocks northeast of 14th Street near the East River, in one of the largest landscaping overhauls in Manhattan’s history.

The project was undertaken by Tishman Speyer, the developer that bought the two apartment complexes from MetLife in October 2006, for $5.4 billion.

At a Pair of Gigantic Apartment Complexes, a Planting Project to Match

But hey, they aren't doing this planting for the middle class who these buildings were created to house:

On Thursday, Carole Jurman, 64, sat on a shade-covered bench in Stuyvesant Town and watched several gardeners go about the business of beautifying the place she has called home for the past 37 years. Since Tishman Speyer bought the properties, rent increases, Ms. Jurman said, have forced some of the 25,000 residents, including several of her longtime friends and neighbors, to pack up and leave.

Ms. Jurman said that while she was “thrilled to see all the wonderful planting,” she was saddened that so many families had to move, and that they will not be around to smell the roses, not to mention the magnolias and skip laurels, when they bloom.

“I feel bad for all of them,” said Ms. Jurman, who lives in a rent-stabilized apartment but would not reveal how much she paid. “There’s almost no place left for middle-class families to live in New York. It’s a terrible situation.”

Those folks probably live in a world of concrete now.
Posted by Queens Crapper at 7:30 AM

They cut down trees to make room for this project.

Take a look at every new construction in the city. You always see plenty of new planting.

Take a look at development in Queens. They always cut down old trees.

I guess they feel immigrants don't need shade. Working 16 hour days they are never at home when the sun shines anyway.

There were way too many people taking advantage of rent regulation in these buildings. Rent controls limit market supply and keep overall rents high for everyone. No one should be entitled to live wherever they want in Manhattan for cheap rent.

Trees cost money, so they go to the places where people can afford to pay extra for them.

That's why trees in Central Park look like gold and the ones in Queens parks are being mowed down by the Parks Department.

What, LIC is not a community? The streets in LIC don't serve the community?