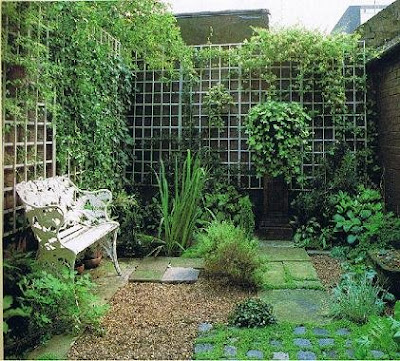 It is often said that parks are the lungs of the city. But just as parks help clean the air and cool the city, so do an often neglected resource: the thousands of privately owned front and back yards of the city's rowhouses and apartment houses. The tools to green the city are right under our noses — and PlaNYC2030 and most of New York City's citizens are missing them.

While Mayor Michael Bloomberg's PlaNYC highlights and relies on the substantive and undeniable environmental benefits of publicly owned open space, privately owned public space is barely even on the city radar screen. As environmental concerns move front and center and urban open spaces are increasingly threatened, these back yards suddenly appear to be a valuable resource that we can no longer afford to disregard.

I'm sorry, here in Queens we have no need for this type of land use. Bring on more concrete!
Posted by Queens Crapper at 8:58 AM

Indeed, in Queens this is wasted space.

Hell, for most of the earth, you could raise a family in the space shown in that picture. Think of each one as a potential clubhouse supporter.

And this is exactly why housing prices will continue to go through the roof.

(Another dirty little secret, virtually all the bigwigs in the clubhouse have summer places. And as to the homes of the developers in the burbs, well, lets not go there!)

I have hope that enough people in Queens see their backyards as an oasis. This spring I have been happy to see so many beautiful trees and bulbs in bloom in my neighborhood in the front and side yards. There are the short sighted pave-over types, but more people who seem to have found creative ways to have that bit of green. My garden, planted with milkweed, is a place where Monarch butterflies come to feed and lay eggs as they migrate. The birds at my feeder this year included mourning doves, purple finches, chickadees and nuthatches. My neighbor to the back has an organic vegetable garden. Bravo about the zoning rule against paving for parking.

Bloomberg should give residents with green backyards some sort of monetary incentive for maintaining them. My husband broke his back for 3 summers to grow a gorgeous green lawn in our little 50x25 backyard. The kids, the birds, and the basement (no more flooding!) all enjoy it.