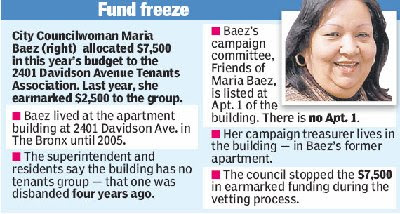 Councilwoman Maria Baez, a Democrat representing the Fordham and Kingsbridge sections, allocated $7,500 of her Fiscal Year 2008 discretionary funds to the 2401 Davidson Avenue Tenants Association, a group supposedly located in the six-story building she called home until 2005.

The building is also the registered headquarters for her campaign committee, "Friends of Maria Baez," and home to her campaign treasurer, Nilda Velazquez, who lives in Baez's former apartment.

But the building's superintendent and more than a dozen residents interviewed at the 60-unit building said there is no tenants association.

[Baez] declined to answer specific questions about the tenants group.

"I will not allow anyone to assassinate my character as a Latina woman," she said.
Posted by Queens Crapper at 8:23 AM

Baez says: "I will not allow anyone to assassinate my character as a Latina woman."

Go right to the ethnic identity card, Baez; that's how to demonstrate clearly that you are guilty!

Hey, Baez, only you can assassinate (clever, inciteful word) your character. And, you did just that when you robbed the taxpayers.

Oh, wait a minute. You wouldn't have started the robbery unless your character was already assassinated by you. People with a living character don't rob (or rape, for that matter).

One more thing. When you play the ethnic card, get it right anyway. "Latina" means Latin woman. You could have said "Latin woman", or, simply, "Latina". So, exactly how Latina are you anyway? Only when you need the identity to incite violence?

As a Latina myself it angers me that your poor lack of judgement or I should say stupidity will impact on the entire Latin community. Shame on you!!!!!!!!!!

So, let me understand this, because you're a "latina", all questions regarding this very curious financial arrangement are off limits? Nice try at the race card, you corrupt ignorant dolt.

The City Council
seems to be harboring quite a crew
of thieving bastards!

Refill the enema bag
and flush out some more shit!

So it's racial carte blanche,
once again, as a justification for stealing.

(or should I have said
"carta blanca"? Sorry).