It only took 13 deaths (this year) 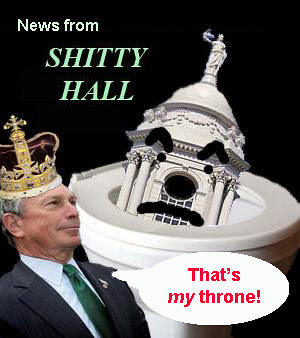 After a sharp spike in fatal construction accidents and other problems at the city Department of Buildings, Mayor Michael Bloomberg said Monday he was not satisfied with the agency and was examining where mistakes had been made.

Amid a historic building boom in the city, 13 people have died in construction accidents this year, one more than the total for all of 2007.

``I don't think anybody should be fully satisfied with the Department of Buildings. Whether they've done everything they can or not is something I'm looking at.''

Bloomberg Not Satisfied with Agency after 13 Deaths

``And let me make it as clear as I can. Simply shrugging your shoulders and saying, 'Well, after all, construction work is a dangerous occupation,' is behavior that will not be tolerated from anyone.''

Speaking Monday at his regular news conference, Bloomberg acknowledged that construction is hazardous and that the building boom just increases the chances that things will go wrong.

``If there's more construction, it makes common sense that you probably have more accidents or mistakes made, but that's not an excuse, and I'm looking into it.''

The Daily News is reporting that his Building czar may get axed. This would be the first firing of a commissioner under Mayor Bloomberg's watch. Back to you, Crappy.

Thank you, Shitty. As Lancaster was not caught playing solitaire at her desk, I predict she lasts out Bloomie's term.
Posted by Queens Crapper at 12:06 AM

"``I don't think anybody should be fully satisfied with the Department of Buildings. Whether they've done everything they can or not is something I'm looking at.''"

It's something HE'S looking at? With what expertise?

Oh, HE HIMSELF is looking at nothing. Someone else is doing it for him. But, see how he takes the credit for "looking into it"?

See how he avoids taking any credit for the 13 deaths. That's Lancaster's fault. So what if he failed to manage her, and overlooked all her failures.

The midget sized shit is a coward. He couldn't care less that anyone died (as long as it isn't a paying developer). So, until this circus act is on the way back to Boston, more and more will die to serve the Mayor's developer friends' interests.

Although Lancaster
is our chief inept boob,
there are many others at DOB!

Mayor Bum-berg will, of course,
fire her.

Getting rid of a scapegoat often
lulls the public into thinking
that something is actually going to be done to improve the DOB.

The problem is DOB itself!

They're in league with the developers,organized crime
(in the construction trades),
crooked labor unions
and last (but not least)
politicians like poster child
Melinda Katz who feed off
developers' campaign contributions.

Until all the crap is flushed out of the entire system nothing will improve.

Pat's replacement is already waiting in the wings of city government!