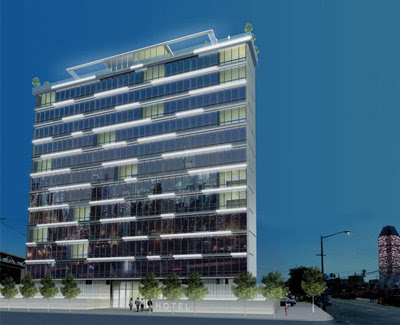 Residents of Dutch Kills, a postage stamp of a neighborhood near Queens Plaza in the western part of the borough, love its abundant light and low-rise charm. So with construction under way on a 16-story hotel with a curving glass facade at the corner of 39th Avenue and 29th Street, the local reception is not universally warm.

For a Raft of New Hotels, the Sound of Grumbling

In the past two years, developers have applied for permits to build hotels on at least 14 local sites, most of them in an eight-block area. The permits indicate that many of these structures would rise at least nine stories high. Construction is under way at several sites.

Steven Bahar, one of the developers, said critics should consider the alternative to such construction. “If we don’t build in New York and the areas that are close to mass transit,” he said, “where are the city planners supposed to put development? In the suburbs, where people use cars and destroy the environment?”

Good point. We all know people in Queens don't own cars and the environment is pristine.
Posted by Queens Crapper at 8:52 AM

Residents of Dutch Kills, a postage stamp of a neighborhood near Queens Plaza in the western part of the borough, love its abundant light and low-rise charm.
---------

Come on guys, like the fellow that got caught with his hand in the cookie jar, and assumes the expression of the choirboy, this is something they wanted, from the babbleing of their president ("sure, development of thousands in Sunnyside Yards is a great thing") to the view of the real power (hi Georgie S - a member of community board 1 - 'nuff said?) this is exactly what they were encouraged to want - more development so they could covert their house into a money pit.

Now they got it.

Now they are the poster child for overdevelopment.

Funny, the role of Queens Civic Congress in helping them upzone (they are almost the only group from western Queens that are part of their group) is never discussed.

Funny, no one in the press has ever cornered any of the politicans and asked them about their role in this mess.

CB1 the community baord from hell.

"abundant light and low-rise charm"- Get a clue!

Steven Bahar is right! This "not-in-my-backyard" mentality towards development, in and around NYC, is what causes a shortage in the supply of housing/office/hotel near mass transit, thereby raisng rents, causing sprawl, and destroying the environment for our kids.
Steven Bahar... we need to elect people like him.

Steven Bahar is right! This "not-in-my-backyard" mentality towards development, in and around NYC, is what causes a shortage in the supply of housing/office/hotel near mass transit, thereby raisng rents, causing sprawl, and destroying the environment for our kids.
Steven Bahar... we need to elect people like him

a real estate broker.... certainly not someone with a 22 story monster in his backyard. besides, communities exist for the people that live in them - not in my back yard is perfectly ok.

Some western Queensite
seems to be tilting at windmills again!

Go and blame QCC
but NEVER attend one of their meetings and take them to task
for their indifference!

Words are cheaper than actions
and verbose vehemence
is this particular ranter's forte!

Can you say RED LIGHT DISTRICT???

Hell,
this was always a good place
to find a whore for a few hours
since the days when Mc Gowan's
"Ye Olde Dublin House" was in business!