No more parking on the lawn 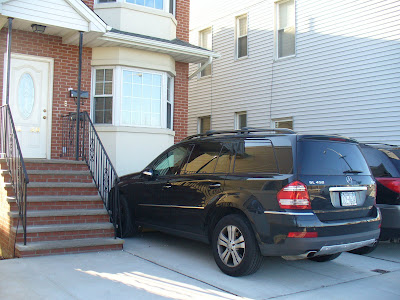 New York's front yards are slated to get endangered species protection this week when a new zoning rule bars homeowners from paving their entire lawn to make room for cars.

Homes will be required to keep 20% to 50% of their front yards covered with greenery, a reaction to parts of Brooklyn and Queens where yards have become vistas of concrete. "It's a good law," said Alec Litster, 38, pointing to the paved yards on both sides of Talbot St. in Kew Gardens, Queens. "It looks terrible. It kind of ruins the block."

The greenery also offers a big environmental boost, because rainwater will soak into the earth instead of gushing into the city's overburdened sewers, City Planning Commissioner Amanda Burden said.

The rules, expected to be approved Wednesday by the City Council, will cover 41,829 acres of neighborhoods. Existing concrete yards are exempt.

"I don't know why anyone would disagree with the law, because it keeps the value of the home," said Ian Springer, 49, who spends $80 a month on his Laurelton, Queens, lawn.

Parking is so precious in some areas, though, that a guaranteed spot can be a selling point, said Darren Lee of Richmond Hill, Queens. "What people are looking for is, does it have a garage or a parking space or a driveway?" said Lee, 30, a real estate salesman who wishes he could park in the concrete yard that is in front of his house but has no curb cut. "In front of my house, that would be great."
Posted by Queens Crapper at 8:26 AM

Good, but will the city enforce this new law, when I call 311 on my neighbor?

No, we have absolutely no intention of actually enforcing this law, but it looks good on paper.

This law should be made retroactive!

In related news, the Times had a story about curb cuts yesterday.

No, we have absolutely no intention of actually enforcing this law, but it looks good on paper.

------------
And gives the politicians, who created the builders freeding frenzy in our communities, some good headlines that they 'care.'