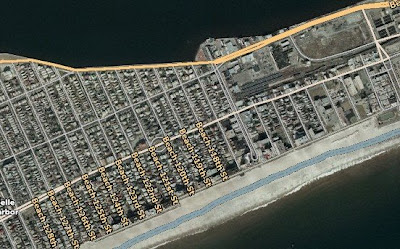 Public review is set to begin Monday on a massive rezoning proposal to protect the Rockaway peninsula from "helter-skelter" development, the city's top planner said.

Downzoning is necessary to protect the peninsula from the "helter-skelter" development made possible under current zoning guidelines, which date to 1961, Burden said.

"This outdated zoning is jeopardizing the future of one of the most breathtaking neighborhoods in the entire city," Burden said, lamenting how apartment towers are popping up all over the peninsula, and oversize home renovations are destroying neighborhood continuity.

You can take out the words "Rockaway peninsula" and insert the name of just about any other Queens neighborhood and the piece will still be relevant. It's interesting how they would move toward downzoning a community that has a subway line running through it because this goes against their 2030 plan. Auburndale, Dutch Kills, Middle Village...your downzonings are still on the back burner.
Posted by Queens Crapper at 8:18 AM

Dutch Kills downzoing? - opening the evelope for block after block of 11 story buildings is not a downzone.