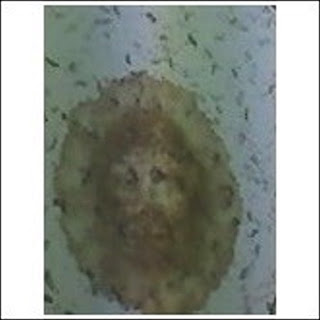 Was it a leaky pipe - or a sign from god?

As Pope Benedict XVI visits the city, employees and patients of St. John's Queens Hospital are buzzing over a water stain on a ceiling tile that some say resembles the face of Jesus.

"I was freaking out," said Junior Rodriguez, a patient who first saw the image above his hospital bed in Room 232 on April 10. "There was Jesus looking down on me."

"This room is blessed," said Rodriguez, a 31-year-old Queens cabby being treated for anemia.

As word spread, hundreds of staffers and patients streamed in to gawk at the quarter-sized brown blotch, which true believers swear forms the bearded face of Christ within a crown of thorns.

"Everyone was screaming and running around. Everyone was coming in to see it," said Pedro Agreda, 47, Rodriguez's roommate.
Posted by Queens Crapper at 7:28 AM

Sure, like the typical Queens institution, the building is falling down around them.

And, rather than be angry, or expect someone to make it better, they get goofy and giggle.

These are the perfect people to move into any official's district: ignorant, backward, superstitious, and hardly ready to make reasoned intelligent choices on civic issues.

The tweeded are the politician's dream.

No wonder everything from churches to clubs to civics to shopping districts in the borough are going down the tubes.

With people like this moving into the borough, forget about sustaining anything (except Botanicas).

Thank you for posting the fashion show. It was a success!

Learn about indoor and outdoor composting