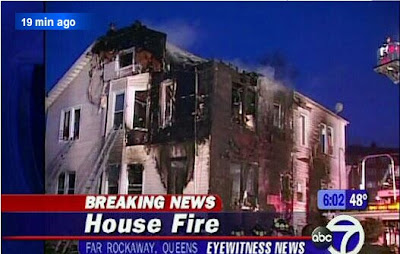 Officials say the fire tore through a large house at 2259 Loretta Road just before 4:45 a.m. this morning. Firefighters battled heavy flames throughout the three-story building.

At least 16 residents -- 10 of them children -- were being treated at the scene. None had life-threatening injuries.

One firefighter was also being treated at the scene.

The address was the site of a October 1999 blaze where firefighters aggressively battled heavy flames.

Two illegal conversion complaints and at least 16 people living inside...wonder what was going on here.
Posted by Queens Crapper at 7:05 AM

Yeah, yeah, yeah! Always blame it on the tenants who crowd into tiny partitions of multiple bed apartments.

Well, did anyone bother to wonder how to heat if all you have is a kerosene lamp. Or, how to light up the place with a single outlet that services the stereo, the TV, the lamp, PC, air conditioner, and microwave.

Never will you see anybody who works all day, obeys the law, and goes to church offering their own home to the people who truly need to live in it. Anyway, even if these sons of bitches did give up their own homes, they would never agree to pay the bills or buy clothing, groceries and entertainment for the needy.

But, yada, yada, yada, they'll complain when they hear the word "illegal". Illegal aliens, living in illegal, crowded apartments, converted illegally by a greedy landlord who sacrificed everything by paying a DOB inspector to look the other way.

Two illegal conversion complaints and at least 16 people living inside...wonder what was going on here.

Thats enough reason to consider this unworthy of news coverage or city council doing anything about it.

The fact that lives are at risk, a community is degraded, and citizens paying for services for a group of people who suck money out of a community to send it abroad is, well, THEIR problem.

they would never agree to pay the bills or buy clothing, groceries and entertainment for the needy.


And, if I struggle to raise my kids and try to spend my money shopping in my community, why should I help people who don't believe in birth control or pay taxes. They are transient, only interested in sucking everthing they can from by neighborhood.

All they leave behind is trash and worn out buildings and bills at welfare clinics paid by my taxes that should go to support my family.

You're breaking the law, destroying the community and putting lives at risk.

Leave you alone...that's a joke.

Please tell me you kidding when you say that hard working, law abiding, church going citizens are to blame for this.

I promise you, you'll never be "Left Alone" if you continue to break the law.

I am quite sure that Taxpayer's comments were facetious in nature.

Please tell me you kidding when you say that hard working, law abiding, church going citizens are to blame for this.
-------

Its funny on the micro level how things could look different on the macro level.

Nazi Germany was made up of hard working etc etc.

You need to look at the whole picture to get an accurate picture.

Actually, there is a HUGE misunderstanding about this particular fire. Yes, the house may have been illegally converted. However, it was converted from one large one family to two smaller side-by-side houses (that are NOT really that small).

The 16 people were residents of BOTH houses. The occupants are NOT here illegally, most were born and raised here in New York.

Granted, they haven't been the BEST neighbors..(the back of that house faces the back of my house). I can't even enjoy my backyard because of some of my noisy neighbors. They are louder (with their music, and the occasional yelling at the kids....ok not so occasional it's a train wreck of noise in the summer) and have too many children that play in the street in the summer (they have no REAL backyard to play in because of the shape of that lot and NO HOUSE should have ever been built on it), but they aren't the absolute worst either. I wish them ALL well.