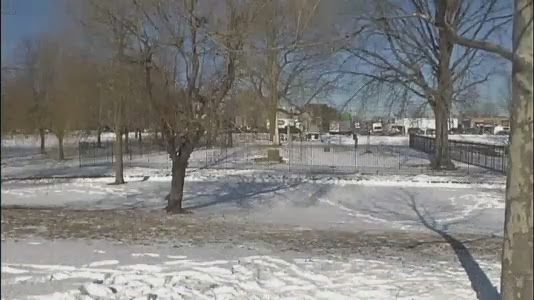 It started last year, when their teachers discovered the photo seen at left while working with the department of education's Teaching American History project that focuses on teaching local history to kids.

"There's an image that said, 'Slave burial ground' in the Bronx, but that was all the information we had on it," said Brian Carllin, director of the Teaching American History Project.
They turned to the Huntington Free Library for help. Its president, Thomas Casey, immediately recognized the photo and offered some insight.

"The U.S. census, the first one we have is 1790, and we find from the 1790 reports that, in fact, about one-third the population were slaves," Casey said.

They were slaves who belonged to the Hunts, Leggettes, the Tiffanys, families that owned large portions of land in the 17th-century Bronx.

The white landowners were buried in a fenced-off cemetery preserved in Drake Park, while the rest of the park was built over the burial ground for their slaves.

Elected officials and community members are now calling for official recognition of the land where the slaves are interred.

"Make sure that we put this site, we put this African-American burial ground on the site of the state historic registry," said state Senator Jeff Klein, whose district covers parts of the Bronx and Westchester.

Those involved say that even a sidewalk in the park could be hallowed ground. They believe that the burial ground stretches throughout much of this area, and they want to see the people buried here memorialized.

Legislators say they won't stop with recognition on the state registry and hope to have the burial ground recognized as a national historic site, too.

This is quite similar to the East Harlem MTA depot site.

But then there's Elmhurst, where no elected officials give a shit about a slave burial ground being destroyed by a condo project, and learning about its history is certainly not part of any school project.
Posted by Queens Crapper at 4:51 PM

What do Queens Historical Society and the Queens Borough Historian say about this?

Both are self-styled 'official' in their capacity and therefor by doing so, made themselves responsible for the state of preservation in the borough.

They will rise again!

There is a possible civil war burial ground in Francis Lewis park.